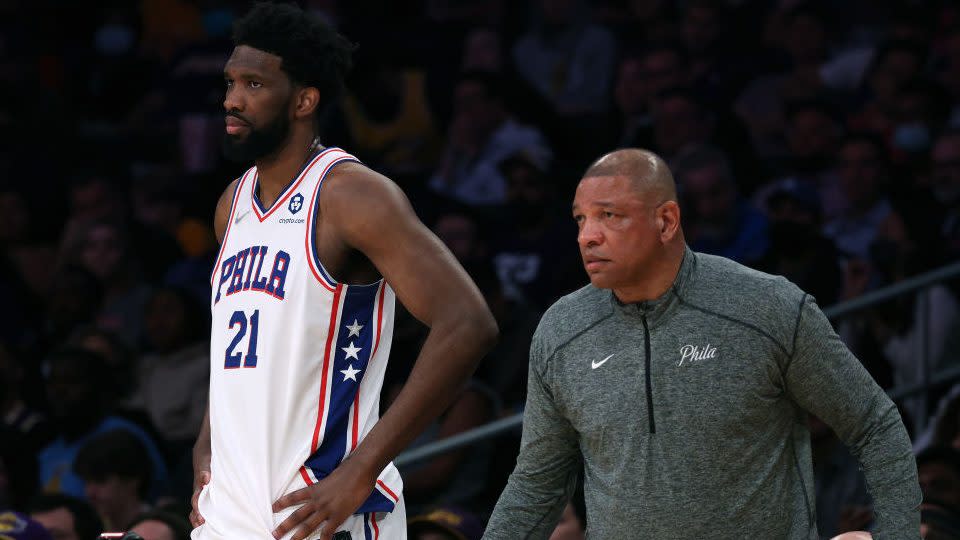 Take a look at that video and notice the time and score — the 76ers were up 29 with four minutes remaining.

That has led to some corners of NBA punditry calling out Doc Rivers for still having Embiid in the game. Saturday at a 76ers practice, Rivers defended his decision to have Embiid on the court late in a blowout. Via Tim Bontemps of ESPN:

“Everyone was in there, and the other team had all their guys in, too,” Rivers told reporters.

“After Joel made the shot and did the airplane [the prior possession], if you watch the game, I turned and said, ‘I’m calling a timeout on the next possession.’ I’m not upset that he was in. You can make that a big deal if you want. But just go look at every team, and every game, and their guys are in until about the 4, 3-minute mark. That’s what it is.”

In the playoffs, particularly a close-out game, coaches wait far longer to wave the white flag and send in the bench. For the Raptors, while it’s improbable they would come back and make the game even close, there’s no game in two days for Nick Nurse to save his stars’ legs for. He can play it out longer than he would for a game in February.

What Rivers did was nothing unusual.

However, it could radically change the course of the 76ers playoffs. Philly needs Embiid to punish the Heat inside — as he did to the Raptors in the first round averaging 26.2 points and 11.3 rebounds per game — plus they need his rim-protecting defense. Embiid could return this series wearing a mask, so long as the orbital bone fracture isn’t serious enough to require surgery, but the 76ers could be in too deep a hole to get out by that point.

For his part, Heat star Jimmy Butler — who said the knee that kept him out of Miami’s closeout game is fine now — said he feels bad for Embiid.

“I feel bad for my guy,” Butler said. “Obviously, one of my former teammates, arguably the MVP of this league. And I think I speak for everybody that’s a part of this team, we want Jo to play. We want to go up against them at full strength and prove that we can hang with anybody and we can beat anybody. It’s a mishap. I hope he recovers well and gets back very, very soon.”