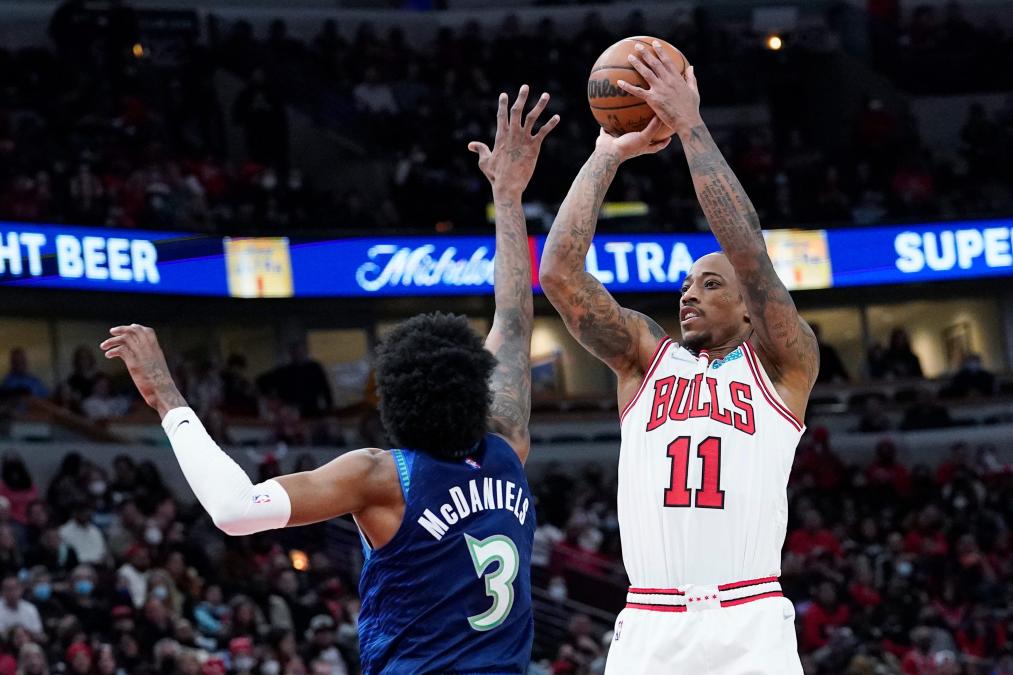 If you ask Draymond Green, the NBA MVP right now is DeMar DeRozan.

“Everybody disrespected what he’s done all these years,” Green said at All-Star Weekend. “For him to take that disrespect and not only continue to play great but take it up to another level has been incredible.”

DeRozan has always been respected by his peers, but his underrated midrange game has never gotten the hype or attention from some NBA observers. Some critics went as far as dubbing him the worst signing of the offseason when he was traded to the Chicago Bulls in August in a sign and trade agreement after three relatively obscure seasons with the San Antonio Spurs.

But now he’s making noise that’s hard to ignore. That’s what he’s aimed to do.

“I wasn’t just going (to Chicago) to wear a Chicago Bulls jersey and try to get some free Jordans,” DeRozan said. “I was going to make something happen.”

With his MVP-caliber play, he earned not only praise from fellow players, but the respect of fans and the media, who voted him an NBA All-Star starter for the first time in four years.

“To be here again after everything I went through, it’s sweet,” DeRozan said.

TOP STORYLINES: Things to look at the rest of NBA season. Who wins the East? Can LeBron James get Lakers into playoffs?

DeRozan signed a three-year, $85 million contract with the Bulls in a sign-and-trade deal in August. His presence was instantly felt, combining with All-Star Zach LaVine to form the “best duo in the NBA,” as LaVine put it. DeRozan said he’s “completely right.”

But DeRozan has single-handedly kept the Bulls near the top of the Eastern Conference without LaVine while Chicago’s roster has been depleted by injuries.

In January alone, LaVine injured his left knee, Lonzo Ball tore his left meniscus and Alex Caruso fractured his right wrist following a dangerous Flagrant 2 foul by Milwaukee Bucks Grayson Allen. LaVine returned after the All-Star break, but the Bulls will be without Ball and Caruso for much longer.

To DeRozan, injuries are part of the game and the sacrifices “nobody talks about.” He himself hasn’t been “100% (healthy) in 13 years.” But he references the Mamba Mentality of Kobe Bryant, who he “always” thinks of: Winning trumps all.

“It’s going to be hard, but if we really want it, damn everything else. It’s all about winning. From here on out,” DeRozan said. “It’s a testament of us winning.”

DeRozan has carried the load in historic fashion. Entering Monday’s showdown against the Miami Heat, he has led the Bulls to six wins in their past seven games and has become the first NBA player to score 35 points while shooting better than 50 percent in eight straight games, eclipsing Hall of Famer Wilt Chamberlain’s previous record. He was named the Eastern Conference’s player of the week following his streak, the only player to earn the title three times this season.

DeRozan said he “can’t explain” his lights-out shooting, joking that he may be “haunted by the ghost that’s in the United Center.”

“He’s always been one of the more respected players in the NBA throughout the players and the guys that actually know it,” LaVine said. “But I think this year he’s put it onto a national broadcast where it shows just how good he is and how much he’s been working on his game.”

He’s also been paying attention to his mental health after opening up about depression during the 2018 All-Star break. He was dealt another blow during the summer of 2018 when he was traded from the Toronto Raptors after nine-seasons to the Spurs in exchange for Kawhi Leonard, who brought the Raptors their first championship in franchise history the following year. Then last February, DeRozan’s father, Frank DeRozan, died after a prolonged illness.

“Over the span of my career, I did a lot of learning, personally, on the court and outside the court,” DeRozan said. “You get caught up of being seesawed so much emotionally with things you are trying to figure out that you just don’t have the answers for and the answers don’t come in a day or a week. You got to go through it.”

Facing adversity “full force” has led DeRozan to be in a good space. He said he chose to come to the Bulls because the franchise allowed him to “just come be myself.”

“This moment now is just me being at my complete balance of life. Content, comfortable. Me just understanding the most I’ve understood in my life,” he said.

The balance allows him to remain cool and calm. It translates directly to his game, like when he knocked down buzzer-beating threes in back-to-back games earlier this year, even though he’s not known for shooting beyond the arc. DeRozan only averages 1.8 threes a game, instead relying his his bread and butter – his lethal midrange shooting.

“You master something and it will give you an advantage,” he said. “This game was based on midrange scoring and anyone just getting to their spots and being dominant with it.”

LaVine’s glad to have his veteran leadership: “I’m glad to have another guy that’s been in these situations, these big-time games, where we haven’t been in that before. He’s been to the Eastern Conference finals and been in big moments. His calmness is always something that’s been helping our team.”

DOMINATING FORCE: Joel Embiid the MVP front-runner. But his eyes are focused on earning his first NBA title

The Chicago Bulls are one game behind the Miami Heat atop the Eastern Conference, with a 39-22 record. They are poised to make the postseason for the first time in five seasons.

“I told Zach when I came — you win, everything comes,” DeRozan said. “Only thing that matters is winning. Everything else that you could dream of or ask for will come. … You go out here and win. Compete at the highest level.”

The rest of the league is on notice.

Miami’s Jimmy Butler said DeRozan and the Bulls are “playing some of their best basketball that we’ve seen all year long.”

“Anytime you add a player like DeMar to your team, your team is going to get significantly better,” Butler said. “They already had a bunch of key pieces to just make it all make sense, and I think they’re doing that at an incredibly high level right now … and they’ve been hit with the injury bug. That’s what’s really crazy.”

This article originally appeared on USA TODAY: Bulls’ DeMar DeRozan is having his best season in NBA; is he next MVP?