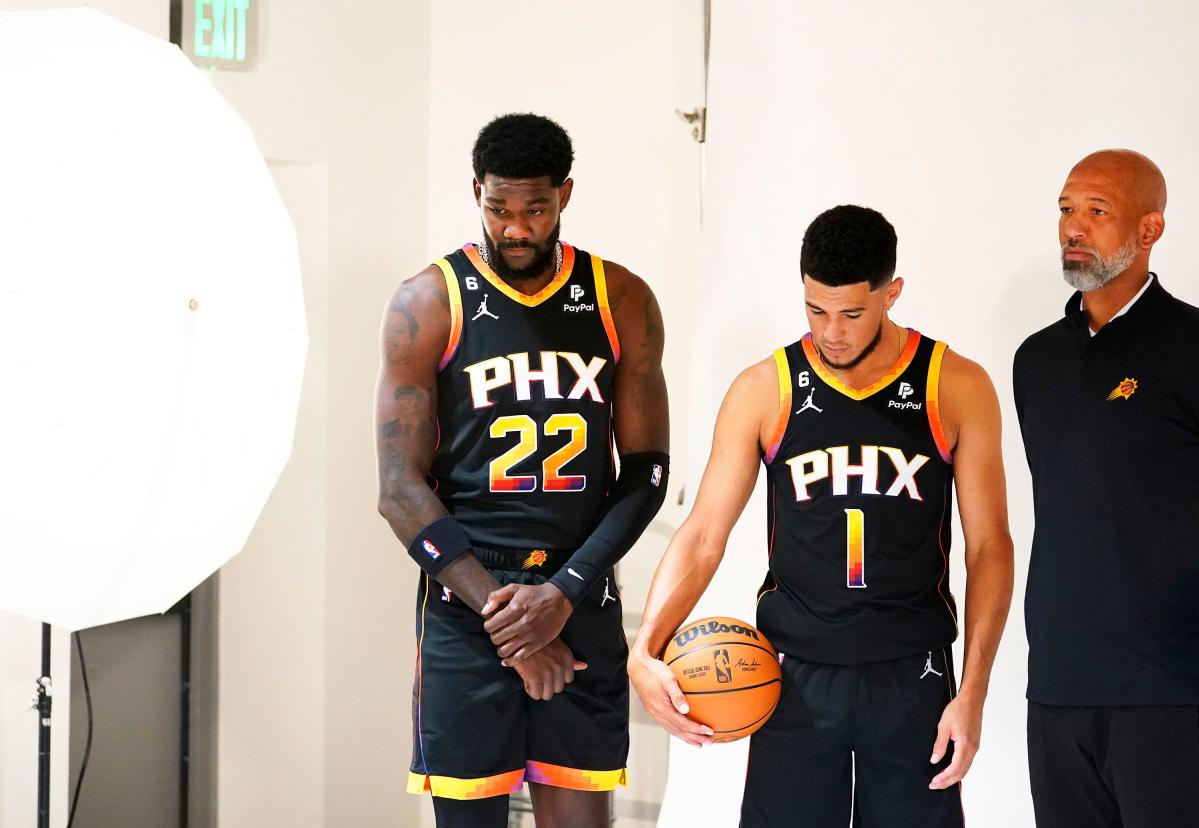 Deandre Ayton has never had a problem speaking his mind.

That certainly held true on the first day of training camp Tuesday as the Phoenix Suns big man said he and head coach Monty Williams haven’t spoken since losing Game 7 of the Western Conference semifinals to Dallas at Footprint Center.

When asked if he hopes that changes soon, Ayton said, “I’m here.”

Ayton said he’s ‘alright’ when asked if he was happy, but talked about focusing on basketball.

“When I’m between those lines, I’m here to work,” Ayton said. “I’m not playing for myself. I have an organization across my chest and a name on my back I have to represent. I’m just here to work.”

Ayton later added, “I just haven’t spoken to the man. A disagreement? I don’t know anything about that.”

The Suns can trade Ayton starting Jan. 15, but he can veto any trade for a year.

In the meantime, Ayton has a clear goal for this season.

“Taking over the whole thing,” said Ayton, who has averaged a double-double in each of his four NBA seasons after being the top overall pick in the 2018 draft out of Arizona. “I know how dominant I am.”

About 10 minutes later, Williams conducted his post-practice interview and was asked if he and Ayton needed to have a 1-on-1 conversation in the near future.

Williams doesn’t see this becoming a lingering problem if he and Ayton don’t talk.

Ayton isn’t the only player Williams said he hasn’t spoken to yet.

“I haven’t talked to a bunch of our guys,” Williams said. “As I said earlier this summer, they needed a break from me, the gym. Unless you were in the gym like every day, I’ve had interactions with everybody, but talking to guys about deep stuff, there’s a number of guys I haven’t talked to.”

Ayton only played 17 minutes in Game 7 as Williams took him out with 8:26 remaining in the third quarter. Williams never put Ayton back in the game.

When asked after the 33-point loss why Ayton only played 17 minutes, Williams said “it’s internal.”

The next day, Williams said he hadn’t talked to Ayton personally.

“No, we didn’t,” Williams said during Zoom availability when asked if he and Ayton talked after the game. “You guys know me well enough, I’m going to do everything I can to help us win games and at that point with the lead where it was, I made a decision not to put him back in the game.”

Five months later, during an offseason in which the Suns matched an offer sheet from the Pacers for four years, $133 million to keep Ayton in Phoenix, the two still haven’t had a 1-on-1 conversation.

The Suns didn’t add anything to the Pacers’ offer sheet in terms of years or dollars.

“It’s just life,” Ayton said. “Nobody really cares about the uncomfortable nature about it. It’s about how you perform and what you’re going to bring to the table. What’s set is already set. I’m here.”

When asked what he’d want to say to Williams if the two did talk, Ayton said, “I can show him better than I can tell him.”

Williams rattled off his time in Phoenix from his first season in 2019-20  to the 2022 playoffs to say he felt the players need a break from him.

“Even when guys were in the gym, I wouldn’t come downstairs just because I wanted them to get a break from me,” Williams said. “I think so much has been made of Game 7, and rightfully so, but we addressed that (Monday night) as a team. You can ask everybody in the gym. I put it to bed last night. We talked about it as we do everything after a tough loss and we just put it to bed.”

Williams continued by saying “your voice can become too much” to hear for the players.

“I didn’t want that to happen because we have done a lot together,” Williams added.

Williams said he and Chris Paul don’t always see eye-to-eye and have arguments that ultimately lead to getting to a “certain place” in the discussion.

“Doesn’t mean it’s a negative thing or a bad thing or a confrontational thing,” said Williams, who coached Paul in his first year as a head coach in New Orleans in 2010-11.

See also  How will Jayson Tatum respond in must-have Game 4 for Celtics?

“If you’re competitive, your going to see things differently at times. Just the nature of being human.”

Williams eventually said he doesn’t want to discuss the situation when asked point blank is Ayton happy in Phoenix and if there is any awkwardness between the two.

“I never want to answer for guys,” Williams said. “I think all of our guys are happy here. We’ve won a lot of games and we’ve had some success and then when you have a blip on the screen, like a Game 7, like I said, things get magnified. To be straight, I’m not going to talk about this anymore cause it just doesn’t make sense to keep talking about one guy after one game. We lost Game 7.”

The Suns open the regular season Oct. 19 against the Mavericks at home.

“I think when you have competitive people, you’re going to have bumps in the road like I have with (Devin Booker), like I have with Chris, like I have with (Mikal Bridges) and you grow from those things,” Williams continued. “I can’t answer for everybody, but I think most of our guys would say that they love the culture, they love being here and I’m as happy as I’ve ever been.”