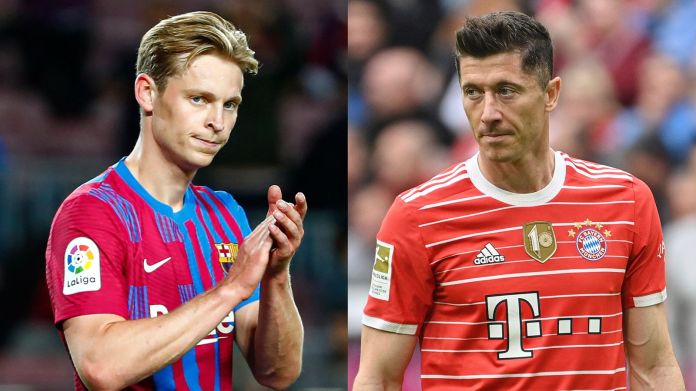 Barcelona Transfer news LIVE: Frenkie De Jong and Lewandowski MAJOR transfer update – Barcelona president Joan Laporta insists the club have “no intention” of selling Manchester United target Frenkie De Jong, but says the midfielder may have to accept a salary adjustment to remain at Camp Nou. Laporta refused to be drawn on Barcelona’s interest in Lewandowski, however, only affirming his respect for the Poland international’s current club.  Follow Latest La Liga and Football News LIVE with InsideSport.IN

De Jong, who emerged as one of European football’s hottest properties under Erik ten Hag at Ajax before joining Barca in 2019, has been strongly linked with a move to Old Trafford since his former boss took over at United.

The Netherlands international said in May that his preference would be to remain at Camp Nou, which he labelled his “dream club”, but the Blaugrana’s financial difficulties have given rise to speculation he could depart.

Barcelona’s desire to recruit wantaway Bayern Munich striker Robert Lewandowski has only amplified such rumours, but Laporta believes De Jong is happy at the club and could stay if an agreement over his salary can be reached.

“Frenkie de Jong is a Barca player and is recognised as one of the best players in the world,” Laporta told reporters.

“We know of clubs that want him, not only United, and we have no intention of selling him. The player, I get the impression, wants to stay.

“He is comfortable at Barca and I will do what is in my power so that Frenkie stays here, but it is also a salary issue and it would have to be adjusted.

De Jong made 47 appearances for Barcelona during the 2021-22 season, scoring four goals and boasting the best passing accuracy (91.18 per cent) of any of the club’s midfielders to play at least 20 games in all competitions.

Laporta refused to be drawn on Barcelona’s interest in Lewandowski, however, only affirming his respect for the Poland international’s current club.

“He is a Bayern player,” he said of the striker, who plundered 50 goals for the Bundesliga champions last season.

“Everyone knows that he is a great player, but I would prefer to be reserved because he is a Bayern player.

“We know that he has publicly stated that he wants to come to Barca and we are very flattered, but we have respect for Bayern Munich, which is one of the best clubs in the world. Between clubs, we respect each other.”