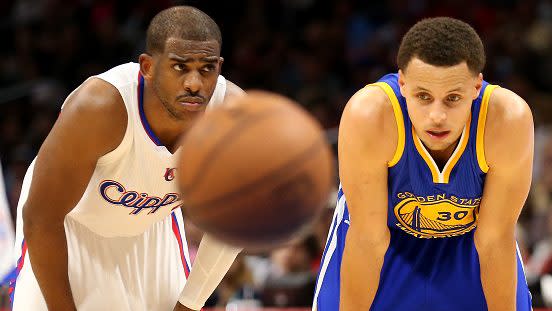 The bombshell that exploded in the NBA back in April of 2014 when audio tapes of long-time Clippers owner Donald Sterling making blatant, transparently racist comments to his mistress, V. Stiviano, shook the league to its core. Not that Sterling being a racist surprised anyone, but the undeniable, in-your-face nature of the recordings led to a backlash. Major team and league sponsors — State Farm, CarMax, Kia, Red Bull, Sprint, Corona, among many others — dropped the Clippers fast.

Caught in the middle of the firestorm were the Clippers players and coach Doc Rivers, who were five games into a first-round playoff series against the upstart Warriors. The Clippers players debated a boycott, ultimately choosing to play, however, they turned their warmup shirts inside out so as not to show the logo.

The Warriors debated boycotting, too. And looking back, Stephen Curry wishes his team had boycotted Game 5, he told Matt Sullivan of Rolling Stone.

Curry privately discussed a unified player response with the Clippers star Chris Paul, twice, because Curry and his teammates wanted to walk off the court after the jump ball. But the Warriors ultimately deferred to their opponents’ protest of choice — the Clippers wore warmup shirts with the logo inside out, then discarded them at center court — and to the league commissioner’s lifetime ban of Sterling.

“One of my biggest regrets is not boycotting the game,” Curry told me. “That was a moment to leverage beyond anything we probably could have said.”

It was not an easy decision for the Clippers players (who came close to boycotting), this was a 57-win Clippers team considered a title contender. The Clippers players wanted to take the court for each other, but not for Sterling. For Curry and the Warriors, it was logical to defer to the wishes of CP3, Blake Griffin and the rest of the Los Angeles team, even if they wanted to do more. Adam Silver banned Sterling for life, fined him $2.5 million, plus took the first steps toward forcing a team sale, which the players saw as the league taking action, influencing their decision to play. Ultimately — with the help of a Machiavellian move by Sterling’s wife, Shelly — the NBA forced the sale of the team to Steve Ballmer. Nobody should think of Sterling as a loser out of this fiasco, he bought the Clippers for $12.5 million and sold them for $2 billion.

Maybe the players could have done more at the moment, a boycott would have sent a stronger message of their disgust and given them leverage. But, at the time, there were no easy decisions. Ultimately the Clippers went on to beat the Warriors in seven games that series, but the Sterling debacle had taken the steam out of their playoff run and they fell to the Thunder in the next round.

Curry has the clarity of hindsight now, but at the time everything was chaotic and there were no easy decisions. The players’ protest at the time was heard, and ultimately Sterling was on his way out, but we’ll never know how much the message of a boycott would have resonated.

Check out more on the Warriors