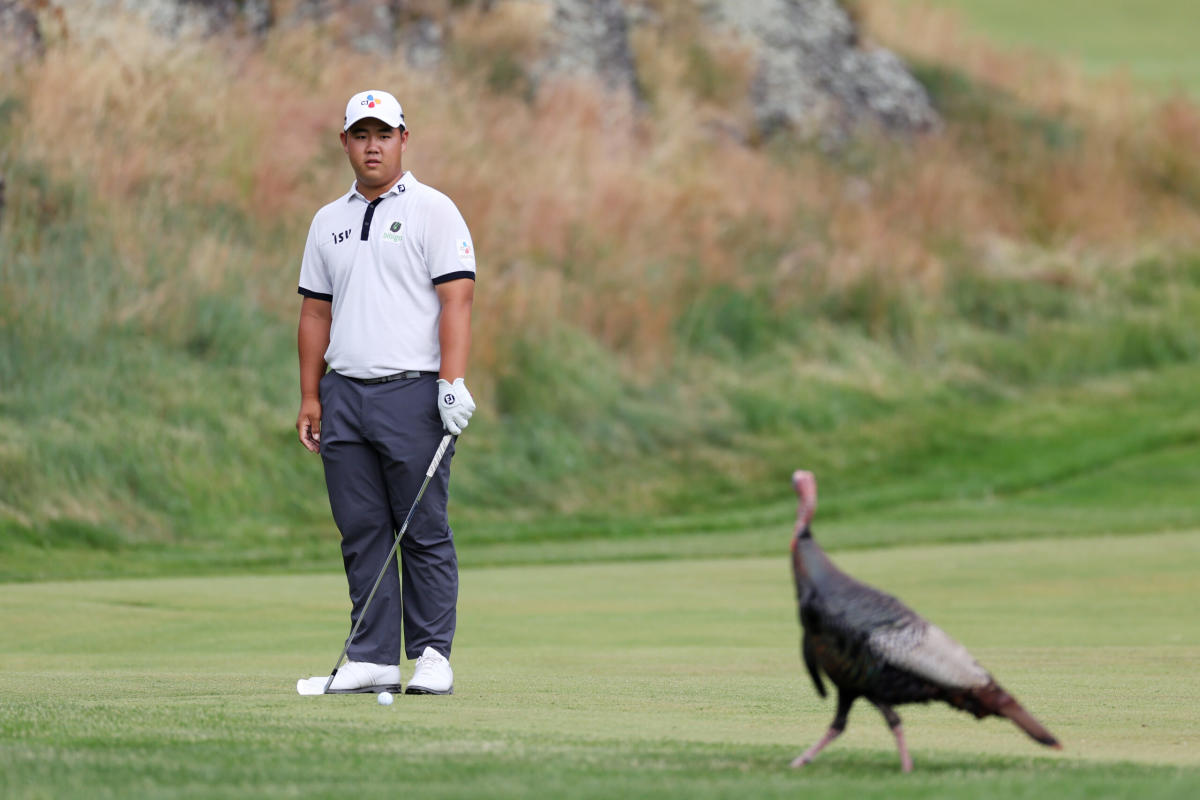 It’s that time of the year again.

Families are gathering around the table, giving thanks and stuffing their faces full while watching football on TV.

However, some folks may make their way to a golf course, scratching that itch that simply won’t go away. Although the professional golf world across the United States is quiet on Thanksgiving, that doesn’t mean golf can’t be a part of the holiday season.

That got us thinking: which golfers are most like certain Thanksgiving dishes? As we try to have a little fun and not take things so seriously heading into the holidays, here’s what we came up with: (A reminder — this is for fun.)

Jordan Spieth plays his second shot on the eighth hole during the third round of the AT&T Pebble Beach Pro-Am at Pebble Beach Golf Links on Feb. 5, 2022, in Pebble Beach, California. (Photo by Kent Horner/Getty Images for AT&T)

Of course, we begin with Spieth as the turkey. Because when it’s done right, it’s perfection. When it’s not, it’s going to be a hot mess.

Joel Dahmen looks on prior to the Fortinet Championship at Silverado Resort and Spa North course on Sept. 14, 2022 in Napa, California. (Photo by Orlando Ramirez/Getty Images)

An interesting creature, and an interesting golfer. The exchanges with his caddie. His bucket hat. The self-deprecation. Does Dahmen roll around in the mud? Maybe. But, he did say at the RSM Classic one of his keys to success was not being an idiot. Either way. Dahmen is a ham. A ham is Dahmen.

Rory McIlroy plays his shot from the sixth tee at the BMW Championship at Wilmington Country Club on August 18, 2022, in Wilmington, Delaware. (Photo by Andy Lyons/Getty Images)

When it comes to mashing the ball off the tee, no one hits it quite like Rory. But no one can forget this legendary clip, either.

Nelly Korda gives a smile on the 18th green during the second round of the 2022 CME Group Tour Championship at Tiburon Golf Club in Naples, Florida. (Photo: Douglas P. DeFelice/Getty Images)

Gravy is a big fan favorite and can add flavor to any dish. Korda, the World No. 1, is one of the faces of the LPGA and makes every leaderboard better when she’s on it.

Fans watch/videotape Tiger Woods as he hits his opening tee shot on the first hole at the 2022 JP McManus Pro-Am at Adare Manor in Limerick, Ireland. (Photo: Oisin Keniry/Getty Images)

Tiger is green bean casserole because it’s the best side dish, even if people are unwilling to admit it. GBC fans are also not ashamed to showcase their loyalty to this dish, and have you ever met a casual Big Cat fan?

Tom Kim plays his shot from the tenth fairway during the final round of the 2022 Shriners Children’s Open at TPC Summerlin in Las Vegas. (Photo: Jed Jacobsohn/Getty Images)

When it comes to stuffing the ball in tight, Kim knows a thing about hitting shots close to the hole. It’s a big reason why he has won twice in the second half of 2022.

Mac and cheese may not be a traditional Thanksgiving dish. Similar to Choi and Furyk’s swings, it’s a bit unorthodox and can look funky, but it certainly gets the job done.

Lydia Ko poses for a photo with the Vare Trophy, the Rolex Player of the Year trophy and the CME Globe trophy after winning the CME Group Tour Championship at Tiburon Golf Club on November 20, 2022, in Naples, Florida. (Photo by Michael Reaves/Getty Images)

See also  Jordan Spieth experiences what it’s like to be the worst player in a foursome (welcome to our world!) and makes subtle dig at Michael Greller

A putting stroke as smooth as butter, Ko rolls the rock with the best of them. It’s why she cashed a big check last weekend.

Brooks Koepka poses with his trophy following his playoff win in the LIV Golf Invitational-Jeddah at the Royal Greens Golf Club on October 16, 2022. (Photo: Amer Hilabi/AFP via Getty Images)

Pumpkin pie is a lot like Koepka. Only shows up at certain weeks of the year and is often hard to find the rest of the time.

Phil Mickelson gives a thumbs up as he walks up the fairway on the second hole
during the first round of the LIV Golf event at Pumpkin Ridge Golf Club. (Photo: Soobum Im-USA TODAY Sports)

OK, this isn’t a Thanksgiving dish, but there’s always the one family member who’s at every gathering during the holidays, right? The one who keeps things slightly on edge — you have no idea what they’re going to say or do, but that means you can’t look away and have to keep an ear out for whatever comes next.