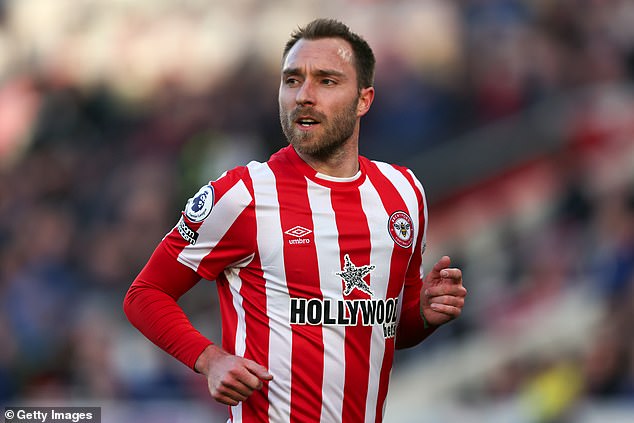 After the miracle comes the mundane and Thomas Frank called time on the Christian Eriksen sideshow to help the Dane look forward to his football and what is fast becoming a serious relegation fight for Brentford.

Eriksen’s appearance as a second-half substitute on Saturday made for an uplifting and emotional occasion, with his family there to witness his first competitive football since his heart attack last year, in the company of the doctors who made this barely believable return a reality.

‘I understand the circumstances that made this a very big day,’ said Bees boss Frank. ‘Now he has played his first game, he just needs to speak about football, only talk with his feet and to be a normal player, even though he will never be a normal player because of what happened to him last June.’

Brentford were two down and a man down when he appeared. Josh Dasilva’s red card in the 11th minute cost them dearly and, although Eriksen lifted the mood with some exquisite touches, in particular one volleyed diagonal pass, he could do nothing to stop a seventh defeat in eight games.

‘He has shown his quality and hopefully he can show that even more in the coming games,’ said Frank. ‘That will definitely rub off on the players around him now he is close to full fitness.

‘He’s an easy player to manage, calm, down-to-earth and I see a top player, with his crosses and assists. When we play a small-sided game in training, he always scores goals, left foot, right foot.’

Joelinton and Joe Willock scored the goals in Newcastle’s 2-0 win, a seventh game unbeaten in the Premier League and three points to lift them up to 14th. 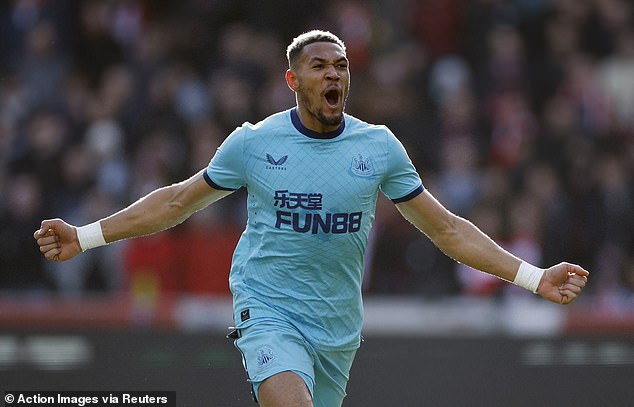 Winger Ryan Fraser, the outstanding player on the pitch, said: ‘We can still finish quite high in the table. The gaffer had a meeting before the game at the hotel and his quote was, “Do you want to be the hunted or the hunter?”

‘We knew we would jump three places if we won and that motivation before we came to the ground was important. Now we need to keep being the hunter and get up as far as we can.

‘Ever since the gaffer came in there has been a change in spirit and a belief we can win. To go seven unbeaten, winning four, is unbelievable from where we’ve been. You get top-six teams who struggle to go seven unbeaten at times. It’s brilliant and all the lads are buzzing for it.’ 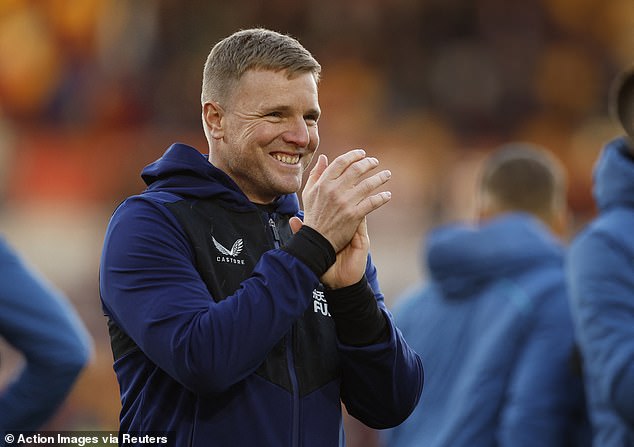 More than 1,700 in the away end were buzzing, too, although boss Eddie Howe remained circumspect as he eyed the upcoming sequence of five games in 15 days, including trips to Southampton, Chelsea and Everton, ahead of the international break.

‘Our next run of games will dictate what happens,’ said Howe. ‘We have a very motivated group of honest professionals who want to do a good job but a good run doesn’t mean anything because confidence and form can change so we have to guard against complacency.

‘The players are not jumping up and down and over-reacting. There is no sense that we have achieved our goals yet. They are well aware there is a long way to go.’