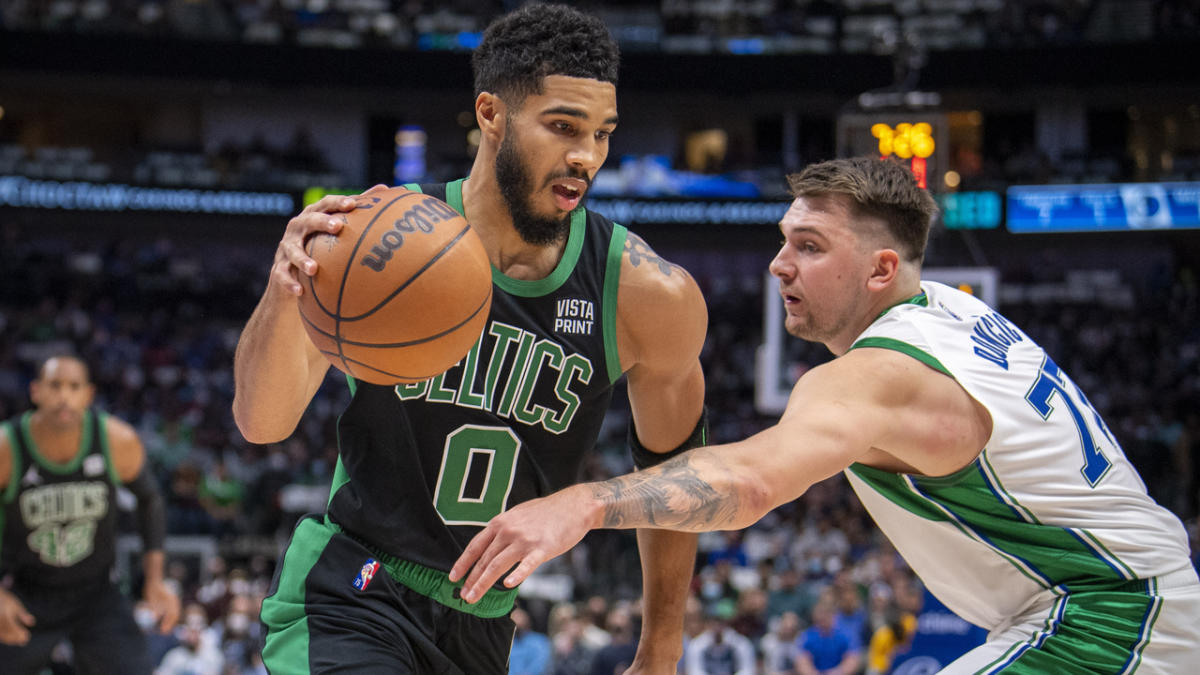 Wednesday night’s Celtics-Mavericks tilt is the sort of game that got a big red circle when the NBA schedule first dropped.

Luka Doncic. Jayson Tatum. A Thanksgiving appetizer featuring two of the NBA’s brightest young stars. A showdown of MVP candidates that’s as tasty as anything that will touch your table on Thursday afternoon.

So we feel your pain if you groaned at news that Tatum is questionable for Wednesday’s game with an ankle sprain. Tatum, already showing signs of wear from a heavy early season workload, should absolutely sit out if that ankle isn’t 100 percent.

Tatum has tried to adopt these attributes from Steph Curry, Joel Embiid

We’re simply left yearning for Tatum and Luka Doncic to share the floor.

After all, we are only promised two opportunities each season to see that matchup. And they rarely disappoint. Each of the last five Celtics-Mavericks matchups have been decided by two possessions or less. Doncic has been spectacular while averaging 37 points per game and producing some last-second heroics, as the Mavericks have won the last four meetings.

Tatum was a bit of surprise addition to Boston’s injury report after landing awkwardly on DeMar DeRozan’s foot while contesting a 3-point shot in the third quarter of Boston’s loss in Chicago on Monday night. Tatum played the rest of the second half but likely endured some swelling in the aftermath.

Tatum entered Tuesday’s action second in the NBA in total minutes played with 633 through 17 games. He could probably use a night off. But considering his gamer nature, it’s likely going to be hard for the Celtics to convince him to skip this one. This isn’t just a game that fans circle before the season.

Not only are the Celtics coming off a loss that left a bad taste in their mouths, but Tatum has reserved some of his best all-around play for when there’s another MVP candidate on the other side of the court.

Doncic is currently the betting favorite for MVP. Most oddsmakers have him as a slight favorite over Giannis Antetokounmpo. Tatum, who briefly shuffled to the top spot, sits third in most odds now. Tatum vaulted, in part, because of his loud start to the 2022-23 season, which included solid wins over both Ja Morant and Nikola Jokic in a five-day span.

The MVP chatter has quieted a bit as Tatum has endured some tough shooting nights but he was peppered with questions earlier this month about what it’s like to be in that conversation.

“It’s always been a dream of mine. And it’s an honor to even be mentioned — the thought, the idea of me winning MVP,” Tatum said before the Celtics’ recent three-game road trip. “But that was not like a goal of mine coming into the season. I wanted to play at an MVP level — playing great basketball, being efficient, and being on one of the best teams. My goal, and I’ve said it all summer, preseason, was to get back to the Finals and not have that [losing] feeling again.

“So, along the way, if we win enough games and I play well enough and I’m able to win that, obviously, that’s a dream come true. But for me, I didn’t say one time this summer, ‘I want to win MVP.’ I just more so want to play at that level and affect the game on both ends, night in and night out, and do what I can to help us win games.”

Tatum’s case for consideration has been bolstered by Boston owning the NBA’s best record to start the season. Doncic, the NBA’s leading scorer (33.5 points per game), has stated his own case with some absurdly loud stat lines, including a trio of 40-point nights and four triple-doubles, that helps mask the fact that the Mavericks are 9-7 overall.

Tatum is averaging 30.2 points per game but his stat line has dipped while shooting 38 percent from the floor and 25.6 percent beyond the 3-point arc over his last four games. He’s still made his presence felt by grabbing a team-high 8.8 rebounds and handing out 6.5 assists per game in that span.

Tatum has stressed a desire to find other ways to contribute to winning when his shot isn’t falling.

“Still impact the game, still rebound, try to get deflections, get steals, get blocks, set guys up, set screens, get into the lane, find somebody that’s open, still have my imprint on the game and ultimately just find a way to win,” said Tatum. “That is what’s most important … At the end of the night, look up and we won, I’m satisfied.”

Tatum has been true to his word. He’s up a full deflection per game (from 1.8 to 2.8) over his last four outings. He’s contesting more shots.

It’s scary to think about what sort of scoring exploits both Tatum and Doncic might produce when both start shooting closer to their career averages from the floor.

If Tatum can’t suit up on Wednesday night, it’ll put a spotlight on his talented supporting cast, including Jaylen Brown. But the Celtics have to prove they can navigate games without Tatum’s steadying presence. The Celtics are 6-14 in games that Tatum has sat out since the 2019-20 season.