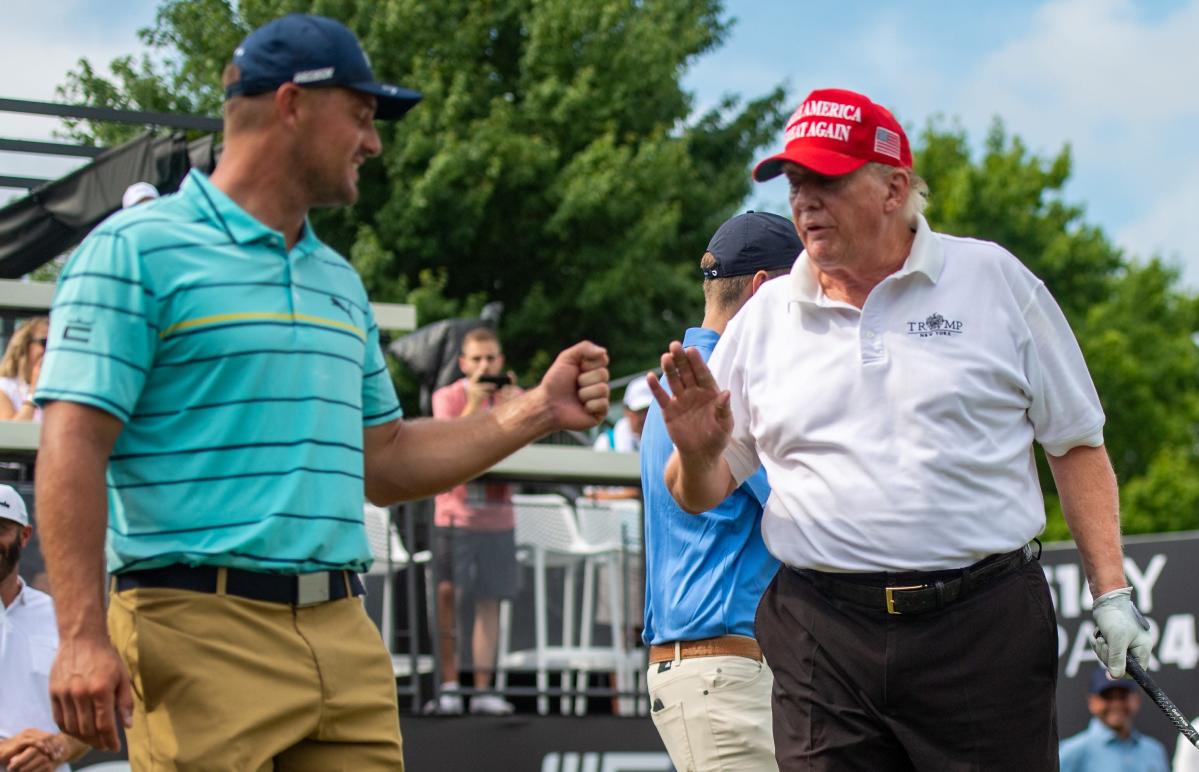 It is no coincidence that taking the money from the Saudi Arabia-backed LIV Golf tour comes with a side of cowardice that manifests in middle-aged men the same way a child refuses to admit to wetting their bed.

Instead of acknowledging what they’re doing, why they’re doing it and who they are now working for, it is much more convenient to change the subject. “We’re athletes, not politicians,” isn’t just a talking point for LIV, it’s practically the credo holding the entire thing together, along with the billions of Saudi dollars flowing into their pockets for the trouble.

But last weekend at Bedminster, the ruse that LIV isn’t an expressly political organization fell apart like human skin under the teeth of a bone saw. And it should surprise absolutely no one that Donald J. Trump was right in the thick of it.

SPORTS NEWSLETTER:  Get the latest news and analysis in your inbox

OPINION: LIV Golf Series remains the most empty thing in all of sports

Sorry, but you can’t claim apolitical status when video clips emerge of the former president, owner of the golf course and perhaps a 2024 candidate for the presidency encouraging “Let’s Go Brandon” chants while standing next to Congress’ most well-known conspiracy theorist, Marjorie Taylor Greene. Dustin Johnson and the rest of the LIV bros can’t seriously suggest they’re not being used as political props when they’re teeing off with “Trump 2024” banners in the background.

And when Greg Norman sits down with Fox’s Tucker Carlson for a nine-minute interview that was so cozy and comfortable it might as well have come with a hand massage, he’s no different than the scores of right-wing politicians who go on that show claiming to be persecuted while answering zero tough questions.

After three events, the mask has come off. Even if players do not believe they’re participating in an operation to launder the international image of Saudi Arabia, they cannot possibly deny that LIV is now being used to feed Trump’s ego and his political ambitions.

When the conversation was just about Saudi Arabia, it was easier to bury the hard truths about where the money comes from under an avalanche of whataboutisms and difficult-to-understand words like sportswashing.

But for an American audience, the overwhelming Trump factor makes it much clearer what LIV is all about: For those who attend it, for those who play it, for those who want it to crush the PGA, there isn’t a single entity in all of sports as expressly political as LIV. This is now the MAGA Tour.

Trump’s presence, of course, has been part of LIV from the beginning. Anyone who looked at the initial schedule saw that two of the eight events this year were being played at Trump courses: Bedminster in New Jersey and Doral in Miami. It seems almost certain that when LIV adds more tournaments in future years, one of them will land at Turnberry. A traditional Scottish course that has held four British Opens and two Women’s British Opens, Turnberry is now out of the British Open rotation for the foreseeable future because, well, The Royal and Ancient Golf Club that runs the tournament is scared to death of a scene like the one that unfolded last week.

They don’t want every player being asked about Trump. And they don’t want America’s most divisive citizen going on ESPN and gaslighting viewers by saying “nobody’s got to the bottom of 9/11.”

With Trump, there is never any separating business from politics from personal grievance. And as last week made clear, when you let him in the door, you’re getting all of it.

What is his actual interest in LIV beyond the venue fees he’s being paid for use of the courses?

There’s the obvious connection between the Saudis investing $2 billion last year into a firm run by Trump’s son-in-law, Jared Kushner, which is now being investigated by the House Oversight Committee.

There’s his bottomless well of spite for the golf establishment, which has not only jettisoned Turnberry but also pulled this year’s PGA Championship out of Bedminster and announced during his 2016 campaign that the longstanding event at Doral would move to Mexico.

And finally, there’s Trump’s talent for turning his role in any type of controversy into an aphrodisiac for his supporters. LIV, in that sense, is the perfect vehicle for Trump and Trumpism: They like it expressly because it pits them against the so-called elites.

There’s a deep sense of irony in that because professional golf is undoubtedly one of the most politically conservative sporting spaces in the world. From the driving ranges at PGA Tour events to the country clubs that host tournaments to the corporate movers and shakers of the sport, you’re overwhelmingly going to find people who voted for Trump in 2016 and 2020 and would vote for him again in 2024.

But it’s expressly because those people do not want the sport of golf to be dragged into the Red vs. Blue morass that they’d rather not subjugate their interests in service of his never-ending demand for attention. LIV, whether intentional or not, is now a subsidiary of Trump’s political brand complete with appearances by his cronies and media acolytes.

Though Norman told Carlson that Trump has “been fantastic this week…He’s not putting himself in front of LIV,” the images and video clips told a different story.

Nobody is going to remember who won the LIV event at Bedminster. They might remember Trump egging on chants of “Forty-seven! Forty-seven!” and insulting the current occupant of the White House.

If going to LIV was supposed to be about counting money and avoiding politics, I’m afraid these golfers picked the wrong tour.

From wild horses to majors to the WGHOF, Susie Maxwell Berning’s amazing journey