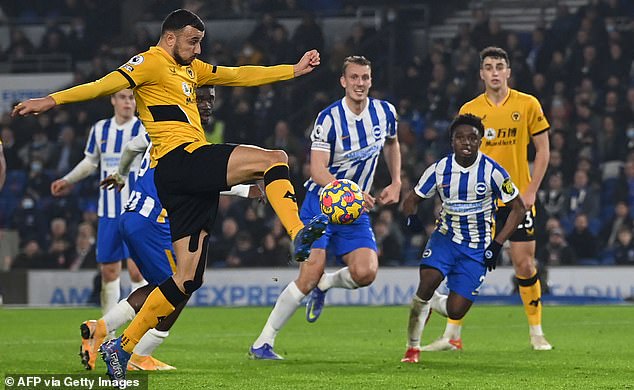 Wolves really needed this. Winless and goalless in four games, the colour had drained from a very positive start to the season.

But this performance and result, albeit one against a Brighton stricken by Covid and low confidence, was restorative for Bruno Lage and his players.

They defended resolutely, absorbing plenty of first-half pressure before Romain Saiss scored comprehensively against the run of play. 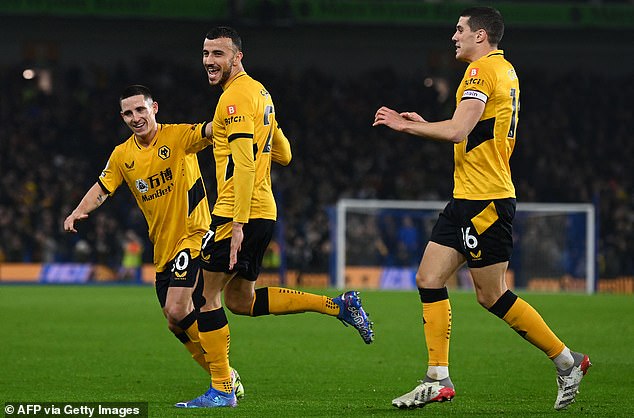 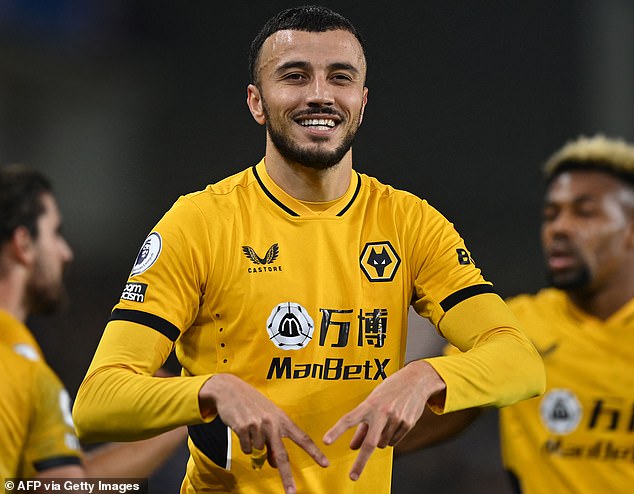 Brighton, now without a win in 11 Premier League games and slipping down the standings, lacked the quality to fight their way back into it.

Graham Potter’s side haven’t won a league game since September 19 and a season that promised to be unlike their others in this division after they won four of their opening five matches is quickly reverting to type.

Even with 13 minutes of stoppage time at the end, added after referee Tony Harrington’s VAR communication equipment failed malfunctioned early in the second-half, they couldn’t snatch an equaliser that would have changed the mood.

Potter had reported ‘three or four’ within the squad testing Covid positive as the Omicron variant does its best to disrupt our festive football enjoyment.

Striker Neal Maupay and midfielder Pascal Gross were among omissions from the matchday squad with fans left doing the detective work when the teamsheets were revealed.

It may have been a bad week on the lateral flows for Brighton but the flow of first-half play was all towards the Wolves goal.

Perhaps it was the fact those who were available had the fresher legs after the postponement of Sunday’s game with Tottenham or perhaps Brighton were just superior but they bossed the opening 45.

Their first chance was a tame effort by Enock Mwepu into Jose Sa’s gloves after six minutes, little more than an early signal of intent.

Wolves were pinned into their own penalty area for lengthy spells, Brighton forcing a succession of corners and crossing positions only to let themselves down with poor execution.

There was the odd chance. Solly March was slipped into space behind Romain Saiss by Mwepu after Yves Bissouma won the ball back in midfield but the shot sliced wide.

Lage had bristled at Pep Guardiola’s remarks on Wolves’ lack of ambition after Saturdays 1-0 defeat at leaders Manchester City but they weren’t a whole lot better here.

It took 27 minutes to muster a shot on goal – a harmless long-range effort by Ruben Neves after the travelling fans had practically begged him to shoot.

Their cause wasn’t helped by the absence of principal threat Raul Jimenez, suspended after his daft red card at the Etihad Stadium, and the fact Hwang Hee-Chan hobbled off injured after just 13 minutes. 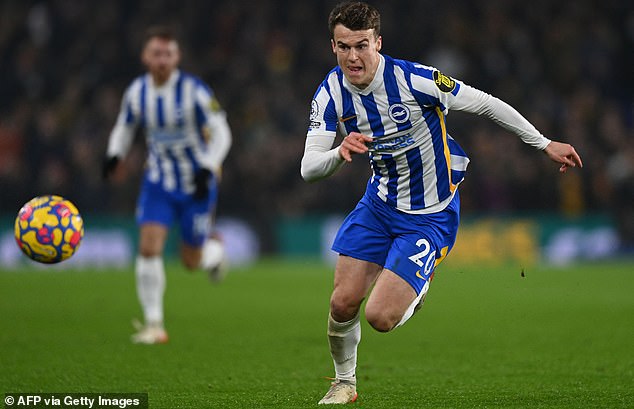 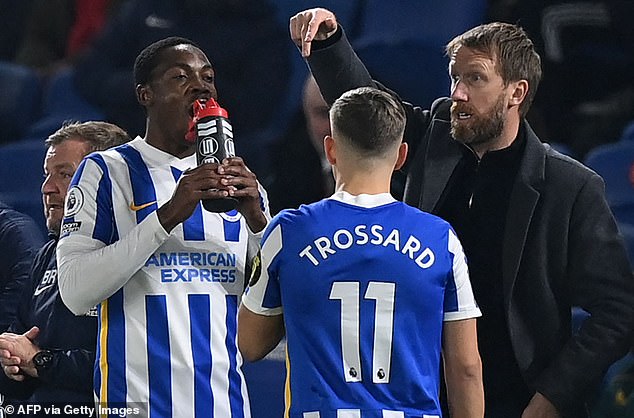 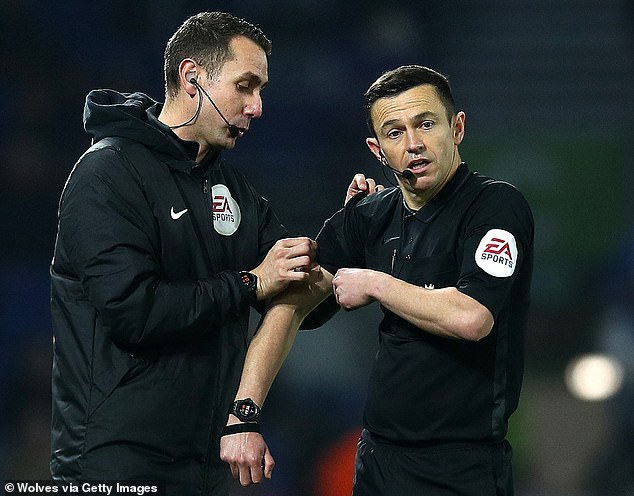 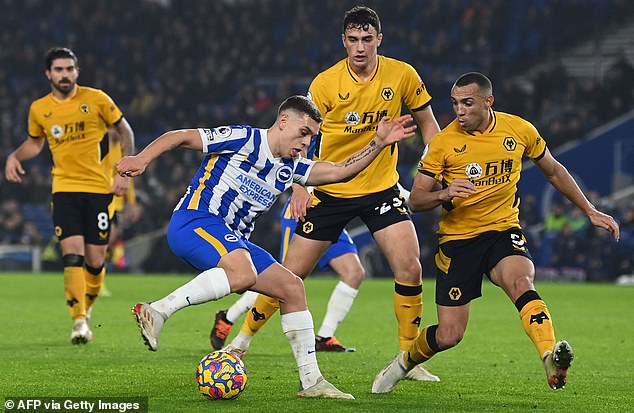 Lage was a restless presence on the touchline. He was annoyed at Adama Traore when he took too long to get ready to replace Hwang and was then annoyed at his first contributions on the pitch.

But his mood was transformed when Wolves scored completely against the run of play in first-half stoppage time.

The original corner was poor and failed to beat the first man but it popped out to Neves on the edge of the area. With immaculate execution, he scooped a pass over the Brighton defenders trying to rush out and Saiss connected sweetly with a guided first-time finish into the far corner.

It rattled Brighton though the home side really should have gone in for the break level. Leonardo Trossard’s shot was pushed out by Sa and fell to Mwepu barely three yards out. Somehow, he managed to clear the bar. 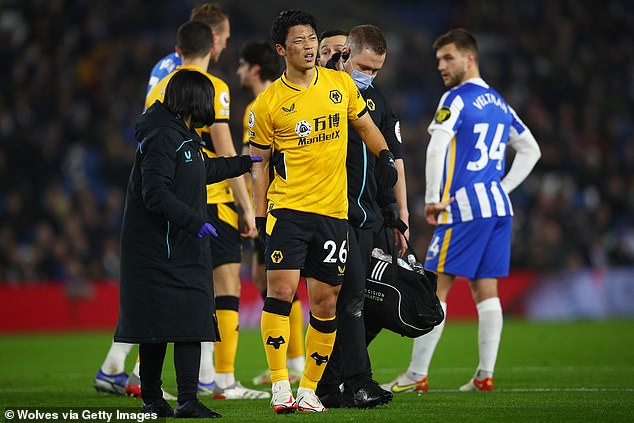 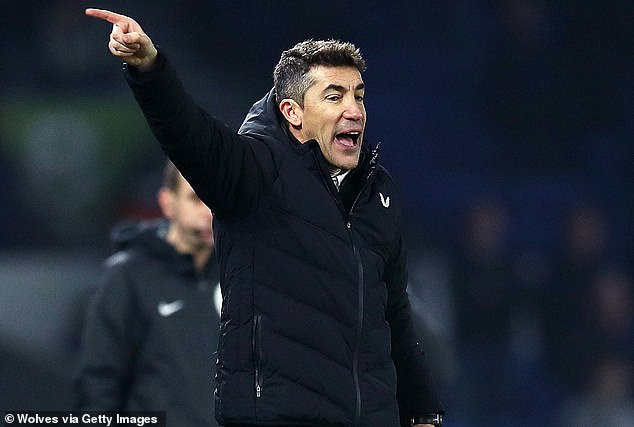 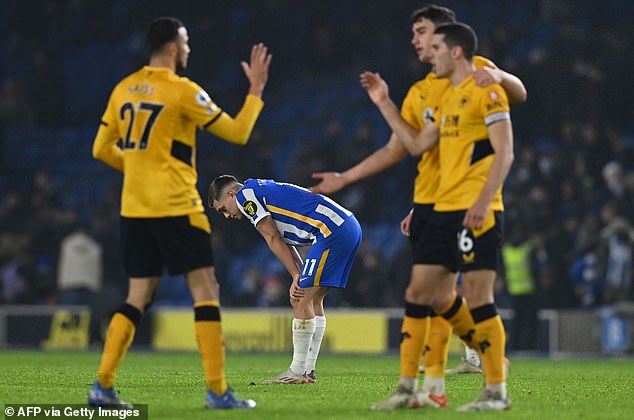 Wolves came close to doubling their lead shortly after the restart. Marcal had come into the team when Rayan Ait-Nouri injured himself in the warm-up and his marauding run down the left resulted in a cross-cum-shot that clipped the top of the crossbar.

Francisco Trincao then forced a save from Robert Sanchez after Traore made headway through the middle before playing him in behind.

The resulting corner was delayed because referee Tony Harrington required running repairs to his communications equipment, during which Daniel Podence and Trincao entertained the crowd with a keepie-uppie demonstration.

When it was finally taken, Saiss slammed in a volley from a tight angle that Sanchez blocked.

The impetus Wolves had been missing for so long was certainly there now. Podence skipped into the clear to force Sanchez into further action and then should have done far better after Traore’s run to tee him up.

Gradually, Brighton regained control of the contest. But Wolves were proving a stubborn nut to crack with substitute Alexis Mac Allister blazing high and wide. The equaliser never did arrive.