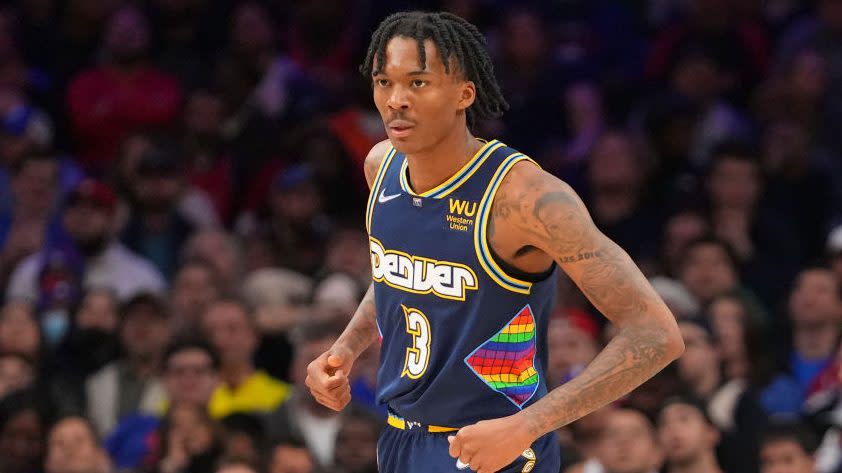 It was March 25, 2018, and then high school standout Bones Hyland was in his room in his family’s Delaware home after an AAU game. He was watching the Kansas vs. Duke Elite Eight game on his laptop and talking to a friend when his room started to fill with black smoke.

The home was quickly engulfed in fire and Hyland was forced to jump from his second-story window to safety on the ground. In the fall, Hyland smashed his right knee into a brick staircase, tearing his patellar tendon and jeopardizing his basketball career. It could have been much worse, his grandmother and young cousin did not survive the fire. Those losses hit Hyland hard.

Hyland formed a tight bond with the firefighters and first responders who helped save him and another cousin that day.

When the Nuggets rookie came to Philadelphia Monday, Hyland met pregame with the firefighters from the station that helped him. They gave him a Wilmington Fire Department jacket.

When asked about his connection to the firefighters and how much it meant to him to carry that forward, Hyland became incredibly emotional, couldn’t find the words, eventually putting his head down and crying for a minute.

More than just the firefighters, Hyland estimated 600-700 family and friends came out from Delaware to Philadelphia to watch him play.

See also  How did the Golden State Warriors get Jordan Poole?

Those friends were not disappointed. Hyland scored 21 including four critical 3-pointers in the fourth quarter to get the Nuggets the win.

Check out more on the Nuggets