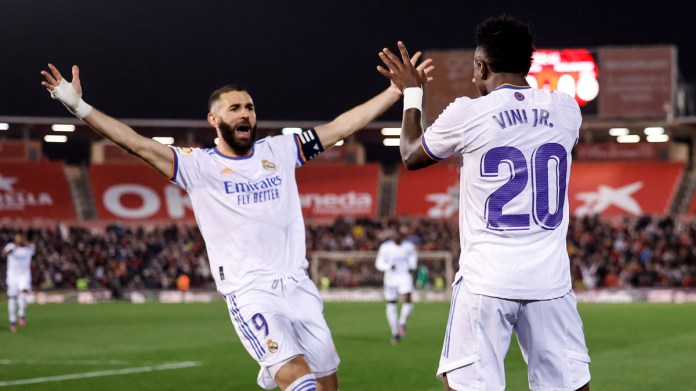 MLC 0-3 RMA: Karim Benzema grabbed an assist and two late goals but also hurt his calf as Real Madrid defeated Mallorca 3-0 on Monday for their fourth consecutive LaLiga win. Follow all the La Liga Updates only on InsideSport.IN

Carlo Ancelotti’s side moved on to 66 points from 28 games, extending their lead at the top to ten points over second-placed Sevilla, who were held to a 1-1 stalemate at Rayo Vallecano on Sunday, a sixth draw in their last eight league matches.

Never has a team that led the LaLiga standings with ten or more points failed to win the title at the end of the season. Vinicius Jr opened the scoring in the 55th minute after a defender lost the ball on the edge of the box and Benzema set up the Brazilian to strike.

Vinicius was then pushed inside the area 22 minutes later and Benzema converted the resulting penalty. The French striker scored again in the 82nd minute with a header from a Marcelo cross, but got hurt in the process and asked to be substituted, pointing to his left leg.

Real Madrid also lost Rodrygo to an injury after a studs up challenge from defender Antonio Raillo on the right foot of the young Brazilian winger. The player was carried off the pitch by Real Madrid’s doctors, unable to put his foot on the floor. Raillo was shown a yellow card.

‘It wasn’t only the tackle on Rodrygo, there was another studs up challenge on Vinicius that was also unacceptable,’ Real Madrid director Emilio Butragueno told reporters.

‘We as members of the football world have to protect our players and can’t allow this type of violent play to be part of our beautiful game.’

Benzema and Rodrygo’s availability for Sunday’s ‘Clasico’ against Barcelona is in doubt as coach Ancelotti said he still doesn’t know the extent of their injuries.

‘We have to wait for the exams later in the week, let’s hope it’s not serious.’ Ancelotti said, as the club informed reporters that Rodrygo’s injury is the one that is the most concerning.

Mallorca are in danger of relegation after five consecutive league defeats. They are two points above the drop zone in 16th.