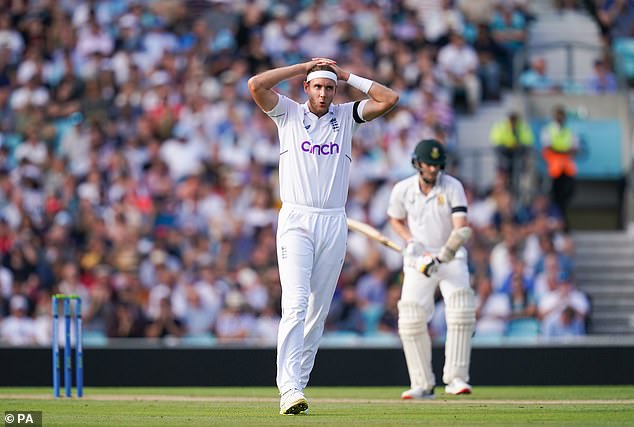 What a FARCE! Captain Ben Stokes frustrated as umpires take England off for bad light 33 runs short of Test series victory against South Africa with the hosts cruising to their target

Stuart Broad voiced his frustration after the umpires took the players off for bad light with England just 33 runs short of clinching a Test series win against South Africa at the Oval.

Sky cameras showed England skipper Ben Stokes looking stunned on the balcony after the decision was made with Zak Crawley and Alex Lees cruising to the victory target of 130 runs.

Broad said: ‘We’re naturally disappointed and frustrated, particularly as the guys were going well. Leesy hit the last ball of the day through the covers for four and was obviously seeing it fine.’ 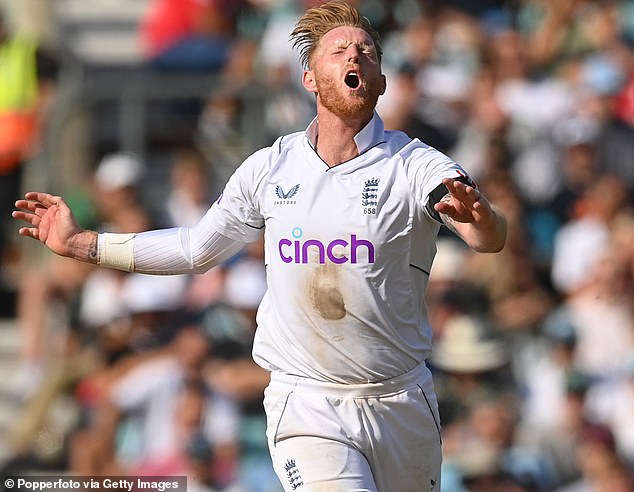 The England pace quartet of Broad, Jimmy Anderson, Ollie Robinson and Stokes bowled superbly as South Africa collapsed after lunch from 83 for one to 169 all out to set up England’s victory charge.

Anderson added: ‘It’s frustrating from our point of view because of the rate we were scoring but it’s the rules. Sometimes though, you think common sense would prevail.

‘I do understand the other side of it, that it would be unfair on South Africa if it rained all day tomorrow and we’d carried on just to finish the game tonight.

‘I can see that side of it but as a changing room, we’re frustrated that we didn’t get to finish it in front of the crowd that have been with us all day,’ added Broad.

It was a memorable day for Broad, picking up his 564th, 565th and 566th Test wickets to pass idol Glenn McGrath on the all-time wicket-taking list. 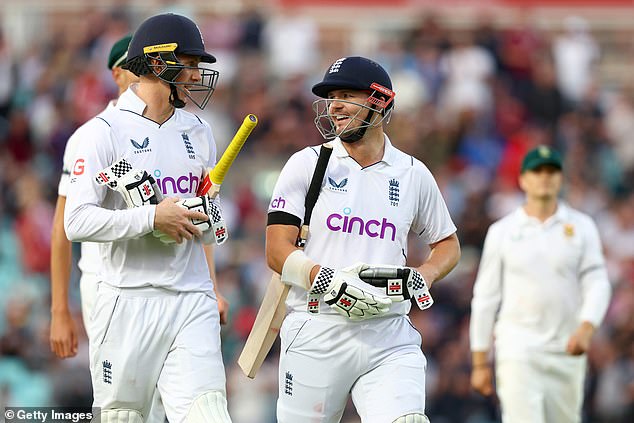 Broad pointed out opening batter Alex Lees (centre) hit the last ball of the day for four, therefore visibility obviously wasn’t a problem for him 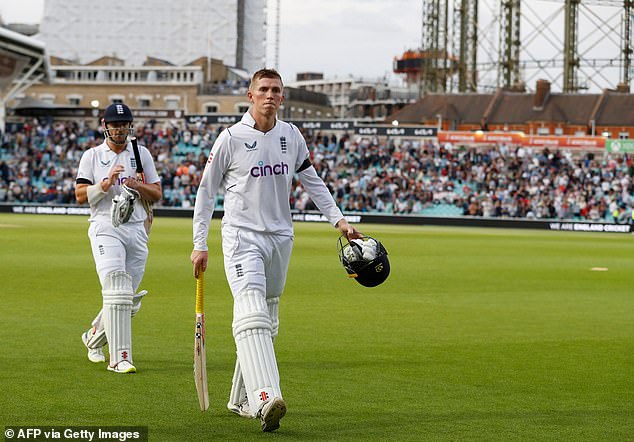 ‘It’s really special,’ said Broad, 36. ‘I saw Jimmy got his 564th on September 11 here four years ago so that was quite funny. Glenn McGrath’s a hero of mine and the reason I wanted to become a bowler, I used to imitate him in the garden.

‘Obviously, he’s a much finer bowler than I’ve ever been but it’s incredible to be there and special to have joined Jimmy as a one-two.’

Asked his plans for the future, with a view to a home Ashes next year, Broad shared his happiness to be ever-present this summer after being dropped for the West Indies tour in March.

‘I came into this summer really motivated after missing out on the Caribbean. It’s been incredible to be part of. The mindset those two guys (Stokes and Brendon McCullum) have brought to us and to Test cricket as a whole has been so refreshing and invigorating to play in.

‘I feel lucky to have played all of the Tests this summer — I think I can make another push to be as fresh as possible for next summer because it’s no bigger summer than Australia coming.’