Mustafzur Rahman picked as many as 4 wickets while allrounder Shakib Al Hasan scalped 3 wickets and contributed 42 runs for Bangladesh in the do-or-die contest.  Oman’s Jatinder Singh looked impressive for 40 runs but other batsmen failed to leave a mark. Kashyap Prajapati was second best with 21 runs. Mohd Naim also slammed 64 runs off 50 balls against Oman to help Bangladesh put a score of 153 in their allotted 20 overs.

Chasing 154, Oman lost its opener Aqib Ilyas (6) in the second over of the innings. Jatinder Singh and Kashyap Prajapati then put on 34 runs for the second wicket, but the partnership ended in the 6th over as Mustafizur Rahman dismissed Prajapati (21), reducing Oman to 47/2. Jatinder then rallied Oman’s innings alongside skipper Zeeshan Maqsood and at the halfway mark, the score read 70/2, still needing 84 more runs to win from 60 balls. Both batters stitched together a 34-run stand for the third wicket, but as soon as Oman started to gain an upper hand, Bangladesh stormed right back as Mahedi Hasan dismissed Maqsood (12). Soon after, Jatinder (40) was dismissed by Shakib Al Hasan and Oman was reduced to 90/4.

Oman kept on losing wickets at regular intervals and in the end, Bangladesh registered a victory by 26 runs to keep their hopes alive of progressing to the Super 12 stage.
Earlier, Mohammad Naim and Shakib Al Hasan played knocks of 64 and 42 respectively as Bangladesh posted a score of 153. Opting to bat first, Bangladesh did not get off to an ideal start as the side lost its opener Liton Das (6) in the third over of the innings. Bilal had Das caught right plumb in front of the wickets. Soon after, Mahedi Hasan was dismissed for a duck by Fayyaz Butt and Bangladesh was reduced to 21/2 in the 5th over.

Mohammad Naim and Shakib then got together at the crease and the duo revived the innings for Bangladesh. The duo put on 80 runs for the third wicket, but as soon as Bangladesh started to gain an upper hand, Oman managed to dismiss Shakib (42) via a run-out. After Shakib’s dismissal, Bangladesh lost the wickets of Nurul Hasan (3), Afifi Hossain (1) and Naim (64) in quick succession and Bangladesh was reduced to 122/6 in the 17th over. However, in the end, Mahmudullah (17) ensured that Bangladesh posts a total of more than the 150-run mark.

18th over: WICKET!!!! Another wicket goes down, Bangladesh is on verge of victory.

11th over- Zeeshan Maqsood slams a six to put Oman in top gear against Bangladesh. Taskin Ahmed’s over reaps 10 runs off the over.

9th Over – Taskin Ahmed is back into the attack. Jatinder Singh hits him for a boundary 7 runs from the over.

8th Over – Mahedi Hasan bowls a tight over just 2 runs from it. Bangladesh need two more wickets while Oman need a good partnership from these two players.

7th Over – Shakib Al Hasan is back into the attack. Jatinder Singh hits him for a six and a four. 10 runs from the over.

6th Over – Mustafizur Rahman is back into the attack. And he takes the 2nd wicket. Kashyap Prajapati on 21. 7 runs from the over wit a six from Kashyap’s bat.

5th Over – Saifuddin to continue from the other end. Kashyap ends the over with a boundary just 7 runs from it.

4th Over – 7 runs from Shakib Al Hasan’s first over with a boundary from the bat of Jatinder Singh. Oman need partnership, Bangladesh need wickets.

3rd Over – Mohammad Saifuddin comes into the attack. Tight over by him with just 2 runs from it.

2nd Over – Mustafizur Rahman comes into the attack and take the wicket on the first ball. Aqib Ilyas departs on 6.12 runs from the over with 5 wides and a six by Kashyap Prajapati.

Fact of the day ?

Fayyaz Butt, who picked up three wickets for #Oman against Bangladesh today, represented Pakistan in the 2010 U19 World Cup ??

He played alongside Babar Azam and was the Player of the Match in the quarter-final against India ?#T20WorldCup pic.twitter.com/K2K8kf6SpR

19th Over – Fayyaz Butt removes, Saifuddin and Mushfiqur on back to back balls. Misses out on hattrick. Mahmudullah finishes the over with a boundary 9 runs from it.

18th Over – Mahmudullah hit Mohammad Nadeem for a six. Just 10 runs from the over. Bangladesh need a bigger finish.

Fayyaz scalps two in an over ☝️

17th Over – Kaleemullah is back into the attack. He removes Afif Hossain on the first ball. Big over for Oman as Naim departs. Now Mushfiqur Rahim and Mahmudullah need to give Bangladesh a solid finish.

16th Over – 8 runs from Bilal Khan’s third over with a six from Naim’s bat to start with, bowler makes an excellent comeback to give just 2 runs in remaining over.

15th Over – Naim welcomes Zeeshan Maqsood with a boundary to complete his fifty. A much-needed one for Bangladesh. 8 runs and a wicket of Nurul Hasan from the over.

14th Over – Aqib Ilyas runs out Shakib Al Hasan on 42. Big wicket for Bangladesh. Shakib was looking set to play big innings. Fayyaz Butt ends the over with just 6 runs from the over.

13th Over – Zeeshan Maqsood into the attack. 10 runs from the over with a boundary from Naim’s bat.

11th Over – Aqib Ilyas bowls 8 runs over with a boundary from Shakib Al Hasan. Bangladesh trying to up the ante.

10th Over – Kaleemullah is back into the attack. 9 runs from the over with a boundary from Shakib’s bat.

9th Over – Off spinner Aqib Ilyas into the attack as two left-hand batsmen are out in the middle. Shakib hit him for a boundary to get. 9 runs from the over.

8th Over – Another tight over by Mohammad Nadeem, just 4 runs from it and another drop catch of Shakib Al Hasan.

7th Over – Fayyaz Butt gets hit for a six as Bangladesh score 12 runs from the over. Another dropped catch from Oman fielder. Their bowling is top class but their fielding is letting them down.

6th Over – Mohammad Nadeem bowls a tight over to end the powerplay, just 4 runs from it.

5th Over – Another blow for Bangladesh as Mahedi Hasan departs on a duck. Fayyaz Butt takes wicket in his first over. 4 runs and a wicket from the over.

4th Over – Kaleemullah to continue. 10 runs from the over as Das hit a six and a four in the over.

A SCREAMER of a catch from Fayyaz Butt ?

3rd Over – Excellent bowling by Oman’s Bilal Khan. Das flicks one up in the sky but the fielder at square leg drops the catch. But finally, Bilal gets the reward as Oman captain takes an LBW review to remove Linton Das. Just 4 runs from the over.

?️ “It is a great opportunity for us to go out there and play expressive cricket.”

Oman players reflect on the pride they feel at being the co-hosts of the #T20WorldCup 2021 ?️ pic.twitter.com/Gp08qznvCJ

2nd Over – Kaleemullah to bowl from the other end. Bad decision by umpire overturned as Liton Das survives after given out, thanks to the DRS. 4 runs from the over.

1st Over – Liton Das and Mohammad Naim open the batting for Bangladesh while Bilal Khan open the bowling for Oman. Just 3 runs from the over.

Bangladesh have won the toss and elected to bat ?#BANvOMN #T20WorldCup pic.twitter.com/y3BggB6RWF

Bangladesh won the toss and opted to bat first against Oman in the must-win here at the Al Amerat Cricket Ground (Ministry Turf 1), Al Amerat on Tuesday. Bangladesh have made one change to their playing XI as Sarkar was left out for Naim.

For more T20 WORLD CUP Updates, follow us at Insidesport 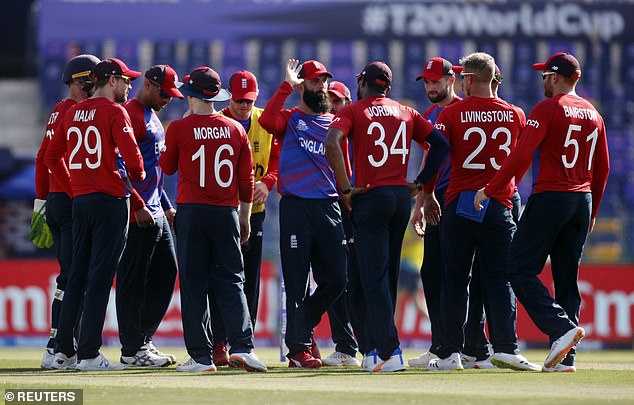