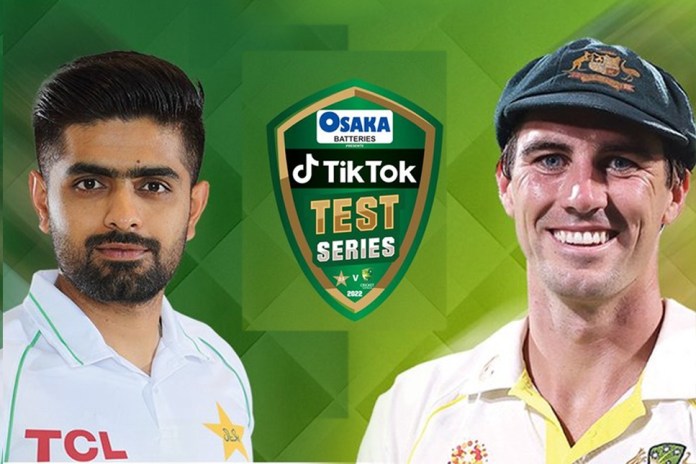 Australia Tour of Pakistan – PCB signs TikTok as title sponsor: The Pakistan Cricket Board today announced that TikTok, the leading destination for short form videos, will be the title sponsor of the historic Test series between Pakistan and Australia, which commences in Rawalpindi on Friday, 4 March. Follow PAK vs AUS Live and Pakistan vs Australia Live Updates on InsideSport.IN

This is the first time a digital entertainment platform has sponsored a bilateral series in Pakistan and represents an exciting step for both TikTok and PCB, bringing a new kind of partner for international cricket in the country.

Australia Tour of Pakistan: Australia coach to keep close eye on IPL 2022 in build up to T20 World Cup, says ‘It will be a nice build-up’

Australia Tour of Pakistan – PCB signs TikTok as title sponsor: As the title sponsor, TikTok will provide a place where cricket fans can follow their favourite cricket content creators, share the best TikTok cricket content, and create their own special moments, reactions and celebrations around this historic series with Australia.

Alongside the partnership, PCB will launch an official TikTok account prior to the series with a mission to inspire and entertain millions of cricket fans not just in Pakistan but also around the world with exclusive behind-the-scenes content as well as current and archival footage.

See also  No pressure, Joe, but the future of Test cricket depends on this Ashes series | The Ashes

PCB Chief Executive Faisal Hasnain: “We have already established an excellent relationship with TikTok, starting with the HBL Pakistan Super League 2022. Given that relationship, we are delighted to extend it further for the historic Pakistan versus Australia Test series, which will probably be the series of the year.

“This agreement with TikTok is a further indication of the current good health of Pakistan cricket and reflects the value and benefit commercial partners see by associating themselves with our brand.”

Australia Tour of Pakistan – PCB signs TikTok as title sponsor:Paul Katrib, Head of Brand Marketing, Middle East, Turkey, Africa and Pakistan at TikTok: “We are delighted to become the title sponsor of this historic Pakistan-Australia series. After the resounding success of our partnership with HBL PSL 2022, we want to continue cementing TikTok’s position as the ultimate platform for cricket fandom in Pakistan.

“TikTok has become a place where people enjoy a new type of experience for sports and cricket, in particular, as more and more cricket organisations, teams and players jump on our platform to engage directly with fans. Our Pakistani community on TikTok loves to celebrate cricket in creative ways, and we can’t wait to see how they engage with all the unmissable content we expect for this historic series against Australia.”

Meanwhile, the Pakistan Cricket Board has confirmed ticket prices for the three-Test series match of which will be played in Rawalpindi (4-8 March), Karachi (12-16 March) and Lahore (21-25 March).

For the Rawalpindi Test, only two enclosure categories are available. The PKR500 VIP enclosures comprise Imran Khan, Javed Akhtar, Javed Miandad and Azhar Mahmood, whereas Premium enclosures include Shoaib Akhtar, Sohail Tanvir, Miran Bakhsh and Yasir Arafat, and the price per ticket has been fixed at PKR100.

There will be four enclosure categories in Karachi and Lahore, the ticket prices are as following:

General – PKR 100 each
First Class – PKR 200 each
Premium – PKR 350 each
VIP – PKR 500 each
Tickets are now available online at pcb.bookme.pk as well as from the nearest M&P Courier outlets from Friday 1100 PKT. All ticket-holders will also have to display their immunisation certificates and CNIC at the time of entering the venues.

In first phase, the PCB has released 50 per cent of tickets with further tickets to be made available online and nearest M&P Courier outlets after further guidance is received from the National Command and Operation Centre (NCOC).

Follow PAK vs AUS Live and Pakistan vs Australia Live Updates on InsideSport.IN.