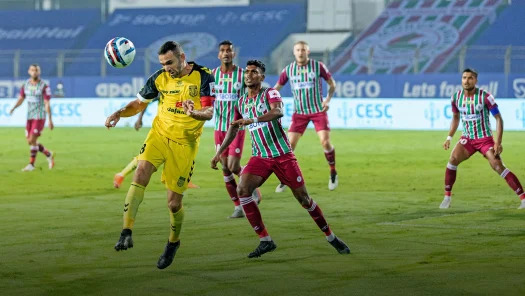 ISL Season 8: Hyderabad FC have a huge advantage heading into the Indian Super League semifinals second leg against ATK Mohun Bagan. Manolo Marquez’s men have a 3-1 lead over the Mariners therefore people are suggesting that they already have one leg in the finals. Follow all the ISL 2021-22 LIVE Updates only on InsideSport.IN

The Nizams were behind in the first leg but scripted a great comeback as Bartholomew Ogbeche, Mohammed Yasir and Javier Siverio scored important goals to down ATK Mohun in an epic clash. So this puts a lot of pressure on Juan Ferrando’s men as they need an outright win by three goals to qualify for the finals or a two-goal victory to force extra time.

The match will be influence by some quality players and both teams have that in abundance. But here is our list of five players who can make a mark in the up second leg of the campaign.

Probably one of the best Indian centre backs currently, Chinglensana Singh has grown in stature ever since he left FC Goa to try out different challenges with Hyderbad FC. He worked hard under Manolo Marquez and became one of India’s best centre back.

The 25-year-old has been one of the most consistent and reliable defenders in the country. Chinglensana Singh’s understanding and partnership with Juanan has been the talking point for the Hyderabad FC fans this season. The young defender will be tasked with the big job of keeping out the likes of Roy Krishna, David Williams and others at bay on the big night.

The Finnish midfielder has gradually come to form in the latter part of the season for ATK Mohun Bagan. Kauko has delivered when the going has been tough for the Mariners. He can really be proud of his recent performances for ATK Mohun Bagan. It is his ability to feature in different roles in midfield that allows Ferrando to tap into his full potential and also extract the best out of him.

The Finland international has registered six assists this season along with three goals and has looked very good in recent times. After a tough start in India, a lot of people including experts felt that it would be a tough time for Kauko to adjust to the conditions, weather and football in India. But the 31-year-old has proven that he can overcome several difficulties. Juan Ferrando will need the Finnish midfielder to step up and control the midfield for the Mariners in the semifinals second leg.

Also Read: ATKMB vs HFC: ATK Mohun Bagan aim to climb the mountain, Hyderabad FC on the verge of reaching their first ever ISL finals

The breakthrough star of the season has to be Liston Colaco. The young Goan has at times carried ATK Mohun Bagan singlehandedly with his brilliance in the final third. He has scored exceptional goals and has led the charge in Roy Krishna and David Williams’ absence. Colaco’s growth has been exemplary as he has developed into one of the vital cogs in Ferrando’s lineup this season.

The 23-year-old winger has netted eight goals this season along with four assists and is the highest Indian goalscorer this season with some exceptional goals. Liston has grown in stature from being just a young talented winger to a very reliable player who can step up and score when needed. Stating from his trickery and skills to goals from setpieces and counters, the former Hyderabad FC man will be the one to watch out for as he takes on against his former team.

It has not been the usual season for Roy Krishna as he missed a lot of matches due to injury. But still, the Fijian has done it time and again in India and also throughout his career so it is impossible to keep ATK Mohun Bagan’s talisman out from this list. The Mariners need goals to reach the finals and for that Ferrando needs his main man to deliver upfront. Krishna did score in the first leg and will hope to add more to his tally in the second leg against the Nizams.

Despite playing 15 matches this season, Krishna has scored six goals and mustered four assists. But none of that matters right now as the Green and Maroons need a big performance from him on the big night against Manolo Marquez’s men.

Arguably the player of the season in this current campaign, Bartholomew Ogbeche has the ability to finish games all on his own. The Nigerian is currently running away with the Golden Boot this season having scored 18 goals this season. He also scored a decisive equaliser in the first leg changing the course of the game completely.

The 37-year-old is ageing like fine wine and every game looks like he is getting better with his movements and awareness in the final third. His close control and goalscoring instincts have helped him achieve greatness for the Nizams this season. He flourishes more when he is allowed freedom upfront something that Manolo Marquez understands and respects completely. Ogbeche will surely be one of the players to watch out for on the big night against the Mariners as he can help Hyderabad FC reach their first-ever ISL finals.