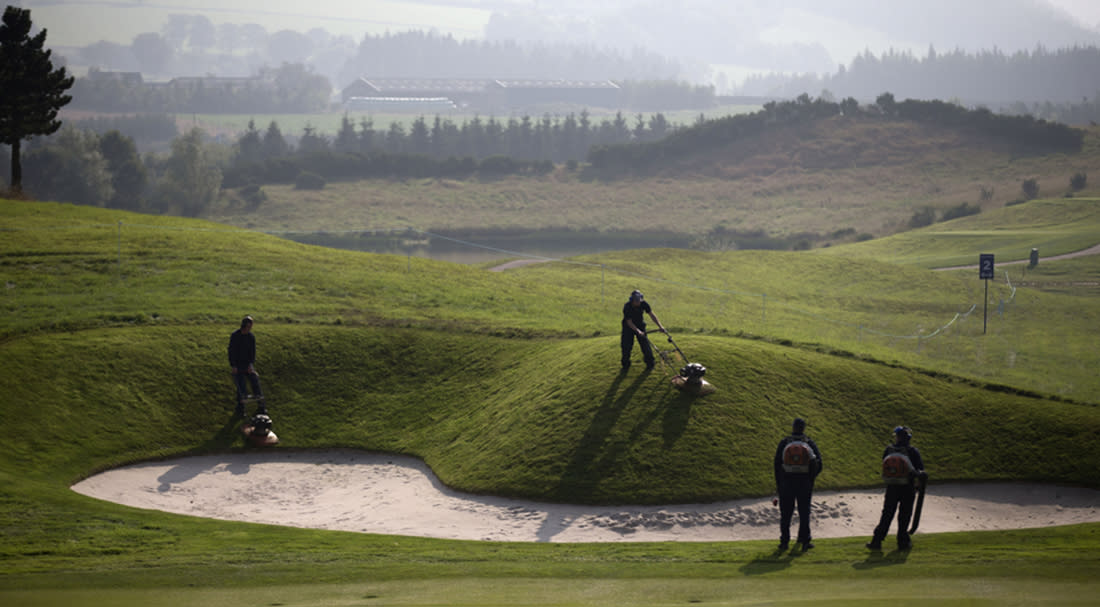 Time marches on. In fact, it marches with such merciless purpose, it just about tramples us into the ground. Take technology, for instance. Some cutting-edge contraption you bought just two or three years ago now looks so old-fangled it may as well be housed in a museum next to such antiquities as the turnspit dog and hand-cranked mangle.

In the world of greenkeeping, meanwhile, things have developed at such a rate, Old Tom Morris, that pioneering golf course custodian of yore, would probably have choked on his own hand scythe with excitement had he been around to witness the advances.

At the sharp end of the industry, far removed from a flock of sheep chomping away at clumps of lush rough, smartphones can control irrigation and sprayers, autonomous mowers can trim merrily away themselves while hidden sensors under greens keep an eye on moisture and nutrients and feed soil data back to a centralized hub. The gee-whiz gadgetry knows no bounds.

“This is a message we are trying to get out there to youngsters,” said Karl Hansell of the British and International Golf Greenkeepers’ Association (BIGGA). “It’s not just about mowing a green. Look at the amount of exciting technology that’s now available. It’s a wonderful industry to be in.”

Europe’s Graeme McDowell takes a selfie with a group of greenkeepers after putting out on the fourth green during a practice round ahead of the 2014 Ryder Cup.

Encouraging a new generation of greenkeepers into this particular industry is one of BIGGA’s key objectives. In an age when everything, from the government, the climate and the cost of living, comes with the word ‘crisis’ attached to it, the greenkeeping business has its own challenges to confront and combat. The startling results from a survey commissioned by BIGGA earlier in the season raised more eyebrows than a cosmetic surgeon and illustrated some of the harsh realities of life at the mower blade.

“Growing anecdotal evidence told us that golf clubs had been struggling to recruit quality staff and we wanted to understand the scale of the challenge,” said Hansell. “We received more than 1,300 responses and the data we gathered was pretty shocking.

“Many – more than a third – said they were actively looking for a job outside the greenkeeping industry. Half told us they were unhappy working in the profession. Is it any wonder that 84 percent told us they struggle to recruit staff?

“For the first time, the survey results presented us with hard data that we could present to the wider golfing industry. Were all those unhappy greenkeepers to leave the industry, the sport would find itself in dire straits.”

According to recent statistics, Hansell noted that 53 percent of golf clubs in Britain currently have green-keeping vacancies.

“We are not blessed with thousands of people coming into the industry and much work needs to be done to improve the visibility of the profession,” he added. “A full-time member of staff averages around 2,000 hours on-course work per year. It isn’t difficult to imagine the impact on a golf course of staff shortages.

“Some clubs are struggling to get even the basics of course management and presentation done, let alone all the project and development work necessary for a course to maintain its position and reputation.”

As a body that provides support and a unified voice for the greenkeeping profession, BIGGA is urging the wider golf industry not to stand idly by and let, well, the grass grow under its feet.

A greenskeeper cools down the greens prior to the 1990 PGA Championship at Shoal Creek.

“BIGGA is actively undertaking initiatives that will raise awareness of the profession, but golf must face up to its responsibilities with regards staff wellbeing and support,” said Hansell.

“Only 20 percent of clubs, for instance, provide single-sex changing rooms, while 30 percent don’t even provide an office or kitchen facilities. For things to change, golf clubs must offer working conditions and salaries to suit the modern workforce and we’re working with golf’s governing bodies to push the industry toward that goal. We need to put in place structures at clubs that respects and rewards these professionals.

“We want to highlight that the entire golf industry is only possible due to the hard work of those who prepare golf courses and yet they largely feel overlooked and unappreciated. Unless strong action is taken, then we will see a reduction in course quality, which is likely to impact on golfer enjoyment and therefore the sport as a whole. Long term, this will bring into question the viability of the sport.”