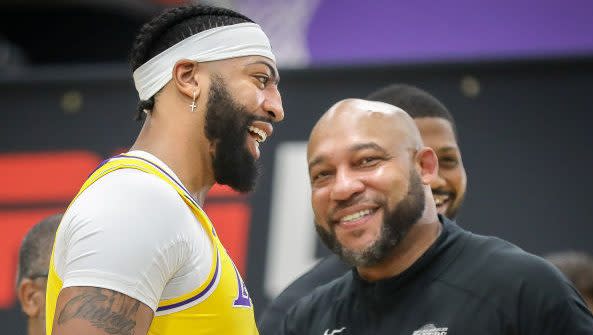 Anthony Davis played 40 games last season, and 36 the season before that. Charles Barkley has nicknamed him “street clothes.”

In a critical season for him and the Lakers, the biggest question with Anthony Davis is not his skill set and if he can be elite, but how much can the Lakers trust him to be on the court? Davis said on media day his goal is to play all 82 games (speaking to Spectrum Sportsnet, the Lakers station in Los Angeles).

A full 82 may be optimistic, but Davis saw last season as a fluke.

“Last season, I had two injuries that you can’t really control. I mean, a guy fell into my knee, landed on the foot,” Davis said earlier at media day. “And the good thing for me is that the doctors after they looked at us, they could have been, like 10 times worse.”

Davis talked about his workout regimen, getting his body both rested and stronger for this long season, knowing more will be asked of him. New coach Darvin Ham wants to run more of the offense through Davis, but all the Lakers’ plans are moot if Davis and LeBron James are not healthy and on the court for at least 65 games this season.

“The focus of my game is being available…” LeBron said Monday. “Availability is the most important thing in his league and to be able to be available on the floor.”

Ham has to walk a line of pushing this team to defend better, show a toughness it lacked last season, and make the playoffs in a deep West while keeping his stars’ minutes under control. In a league all about recovery, the Lakers need to prioritize that, too.

“Just being efficient with how we practice, how we manage shootarounds, how we manage their minutes,” Ham said Monday. “I don’t need ‘Bron or Ad playing playoff minutes in October, November, December.”

It’s the first days of training camp, everyone is feeling good, everyone is rested, and everyone is optimistic. The real tests for the Lakers and Davis start in a few weeks — and just how much will the Lakers’ stars play.

Anthony Davis says his goal is to play in all 82 games originally appeared on NBCSports.com