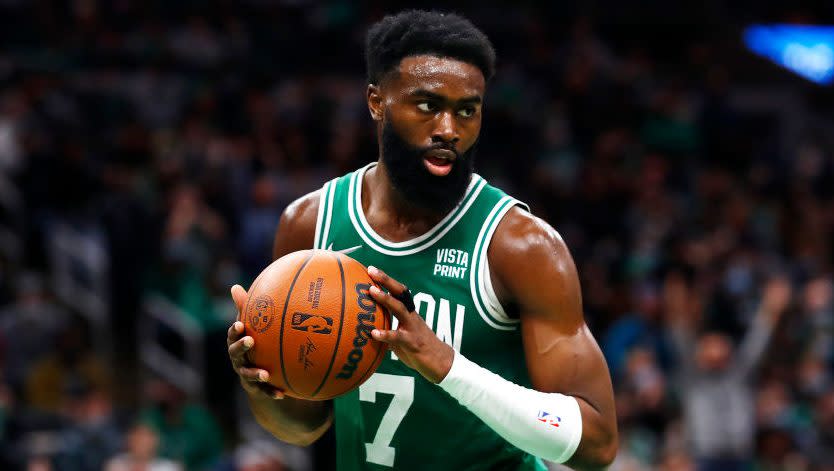 Jaylen Brown was unhappy to see his name in the middle of the Kevin Durant trade rumors.

Did Boston fracture its relationship with one of the core players that led it to the NBA Finals (and, one could argue, was the Celtics’ best player against the Warriors)? A guy who could leave as a free agent in a couple of years?

Apparently not. This has been reported before, and now Steve Bulpett of Heavy.com quotes a league executive who thinks everything is still good between the Celtics and Brown.

“I think Jaylen IS long term,” this latter source told Heavy. “If they want him long term and they’re going to pay him the contract he deserves, I think he’s all-in on Boston. From everything I’ve been told, Jaylen’s a loyal guy. I know frustration can happen when things aren’t going well, and I think we saw some of that earlier in this past season.

“But when you take a step back and look at things, I think he wants to be there. And any problems that could ever happen with that relationship would probably have to come from him getting the idea that they’re not in on him. And right now I don’t see that from the Celtics. I think they know what they have in Jaylen — now and for the future — and they want to keep that going.

“But, like I said, it’s Kevin f****** Durant, and you know Brooklyn is going to want to talk about Jaylen. Even if stuff about trade talks wasn’t getting leaked and reported, anyone with a brain would know that Jaylen’s name is going to come up at some point if they’re talking to Boston.”

That last point is key: All the reputable reporting on Brooklyn and Boston trade talks said things had fallen apart a couple of weeks before the report leaked to the public. Things have not changed between the Nets and Celtics since. So why all the drips of new news to keep trade talks in the headlines and on the front burner? Because it benefits the Nets and Durant. (The Celtics appeared to finally counter leak with the report the Nets first ask was for Jayson Tatum and Brown.) It’s not unlike Durant’s ultimatum to Nets owner Joe Tsai — Durant’s camp made the request, knowing Tsai would never go for it, then leaked it just to put pressure on Brooklyn. If Durant really wanted (and thought he could get) a regime change in Brooklyn, he would have made that demand to Tsai in April/May, not August.

Celtics president Brad Stevens has likely been in touch and been transparent with Brown through this process. Brown also understands, as the best player mentioned as on the table in a Durant trade, that it is in the Nets’ interest to keep the story alive. Even if the trade itself is not.

More and more, the Durant saga appears like it will drag out into training camp, when commitments will get tested. Is Durant, a guy who has built the reputation of a superstar who puts the game first and just wants to play, willing to hold out? Will the Nets have the stomach for the drama and intense media spotlight that will come with a training camp where questions about Durant (and Kyrie Irving) hang over them?

The drama is not near over in Brooklyn, which means it’s not over for Brown, either.