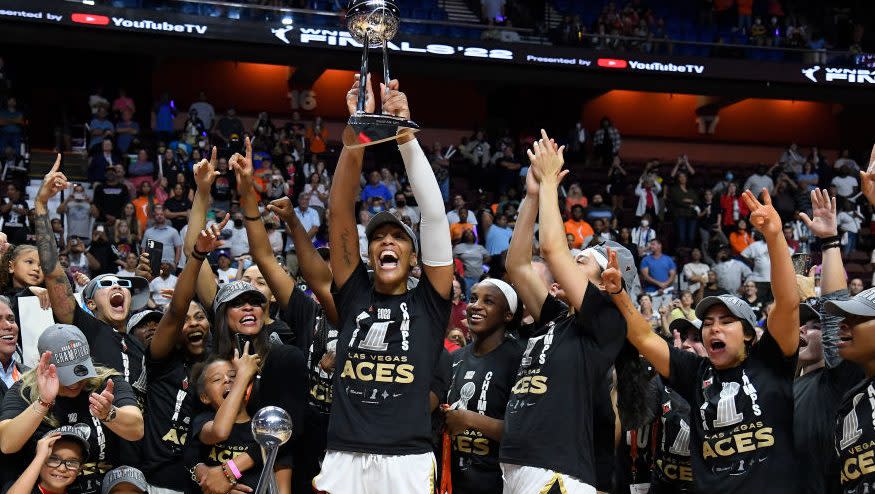 ASSOCIATED PRESS — A’ja Wilson and the Las Vegas Aces look to be a safe bet to win a few more WNBA titles over the next several years, a realization that can’t be ignored even though they haven’t had very much time to celebrate their organization’s first championship.

“I think we found ourselves in this league where everyone has their standard of how they’ve won, and we are creating that,” Wilson said not long after the franchise won its first title on Sunday with a 78-71 victory against Connecticut in Game 4 of the WNBA Finals. “Our journey is just beginning.”

The Aces have several of their core players signed to deals that will keep them in Las Vegas for the next few years.

None is bigger than Wilson, who has already won two MVPs and is entering her prime at just 26 years old. She also was named defensive player of the year for the first time too this season and will be the centerpiece in which the Aces hope will be a title defense next year.

Las Vegas will be attempting to do something that hasn’t been done in the WNBA in 20 years. No team has won consecutive championships since the Los Angeles Sparks did it in 2001 and 2002.

Wilson has been the face of the franchise since she was drafted No. 1 by the Aces in 2018. She led the team to the WNBA Finals in 2020 before they were swept by Seattle.

Now she has a WNBA championship to go along with a NCAA title she won while starring for South Carolina as well as an Olympic gold medal.

Besides their MVP, other key players the Aces have signed for the next few seasons included WNBA Finals MVP Chelsea Gray and backcourt mate Kelsey Plum.

“Knowing that we have commitment for next season is special,” Gray said. “We’re doing it for each other and it’s created a bond.”

That bond starts at the top with Las Vegas Aces owner Mark Davis. He’s invested heavily in the team on and off the court since he bought it in 2021. He lured Becky Hammon from the NBA by making her the first WNBA coach to have a $1-million-a-year contract and is building a brand new practice facility.

“In Vegas, we are trying to build a culture that players want to come and take part in something special, something bigger than themselves,” said Hammon, named coach of the year as she led the Aces to the title in her first year.

She knows the history of the franchise, starring as a player from 2007-14. The team was swept in the 2008 WNBA Finals. Now the organization is celebrating a championship.

“I don’t know, it’s actually hard to put into words right now,” Hammon said. “A little surreal. You know, when I took the job in December, I thought when I started kind of breaking down their rosters that I could do something with it. I had a vision of what I wanted to do with this team.”

Hammon’s vision culminated with a title this year and there could be more on the horizon.

Here’s more from the WNBA Finals