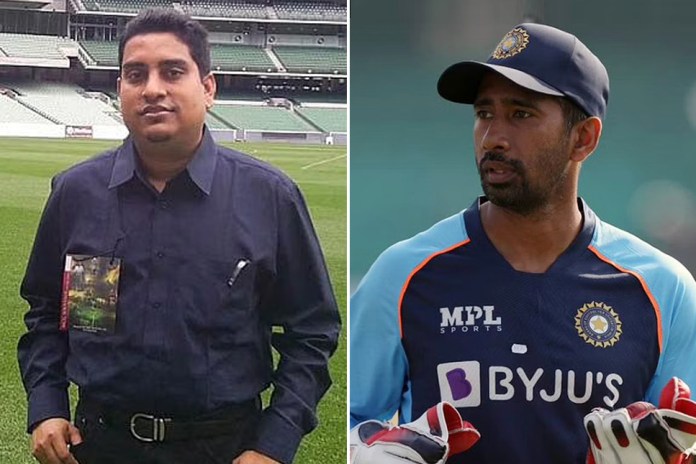 Indian journalist Boria Majumdar has said he will serve a legal notice for defamation on Wriddhiman Saha in connection with recent allegations made by the India wicketkeeper. Majumdar, in a video he put out on social media, said the WhatsApp chat that Saha had put out was a doctored version of an exchange between the two. Saha has not named the journalist who allegedly threatened him but said on Saturday that he’d told the BCCI the details of the incident.

“I have told the committee everything I know. I have shared all the details with them. I can’t tell you much right now. BCCI has asked me not to talk about the meeting outside as they will answer all your queries,” Saha told reporters after appearing before the board vice-president Rajeev Shukla, treasurer Arun Dhumal and IPL governing council member Prabhtej Bhatia.

In February, Saha, who had been dropped from the Indian team for the Test series against Sri Lanka, had taken to Twitter to publish a screenshot of messages that a “respected” journalist had sent him on WhatsApp. The screenshot in question had the sender requesting Saha “to do an interview with me”, to which Saha did not respond. The messages eventually took a more aggressive tone: “You did not call. Never again will I interview you. I don’t take insults kindly. And I will remember this. This wasn’t something ypu should have done.”

With Rishabh Pant establishing himself as India’s first choice wicketkeeper, and Srikar Bharat rising through the ranks to become his new deputy, Saha, who has played 40 Tests, was told by head coach Rahul Dravid that the team would be moving on from him and that he could take a decision on his career. The 37-year old felt he was “indirectly being told to retire.” Not long after that, he was demoted from Group B (INR 3 crore salary) to Group C (INR 1 crore) of the BCCI central contracts list.