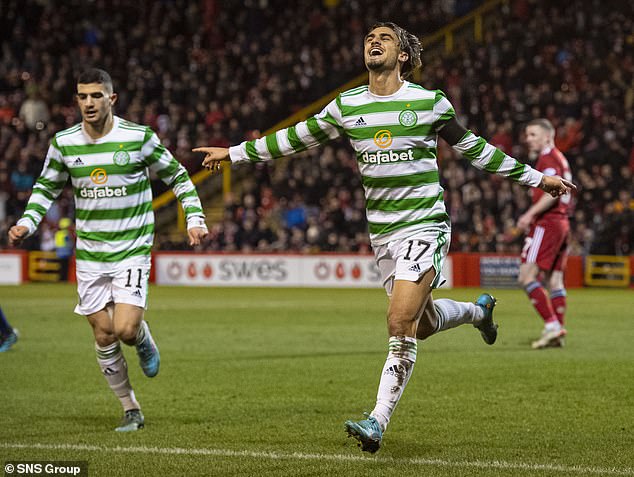 For all of 62 seconds Celtic found themselves in a spot of bother. When they needed it most they dug deep and found the resilience every team with genuine title ambitions needs.

On a chilled night in the Granite City the league leaders were cruising. Two goals in four minutes from Jota and Matt O’Riley had knocked the stuffing from a passive Aberdeen side. Joe Hart was so static and untroubled he should have been wearing thermals and long Johns. The boos of the home supporters demanded some form of response. And they got one.

In a thrilling second half Aberdeen stormed back into the game. Christian Ramirez forced home a set-piece goal with their first shot on target, the American striker denied a swift equaliser by an offside flag.

With Celtic rocking Lewis Ferguson headed home a free-kick after 61 minutes and, if anyone looked like winning, it was the team in red. Not so fast was the cry.

Aberdeen protested long and hard over the Jota goal which earned Celtic a huge three points a minute later. Only the third team this season to score twice against the Parkhead side their arguments fell on deaf ears.

A seventh straight win in the Premiership extended Celtic’s run of unbeaten league games to 20. Unbeaten in the Granite City since 2016 they remain a point clear at the summit of the Premiership.

In a pattern of the season, Ange Postecoglou’s side eased into a comfortable lead at half-time before their opponents started the game. Remarkably given the way the night turned out the opening 45 minutes were ridiculously comfortable for the Parkhead side.

The opening goal after 16 minutes owed much to poor defending from Aberdeen. Matt O’Riley’s left footed cross from right touchline ran all the way through to the back post where coveted right-back Calvin Ramsey and keeper Gary Woods failed to deal with it. Accepting the gift Jota poked in the opener from point blank range and celebrated in front of 2000 away fans by pretending to swing an imaginary golf ball at keeper Joe Hart. Much like the finish he met it flush.

Celtic’s second goal took four minutes to arrive and, this time, Aberdeen’s defence was unfortunate rather than hapless. With 20 minutes on the clock Callum McGregor’s clipped ball was knocked down to the feet of Matt O’Riley, provider of the opener. 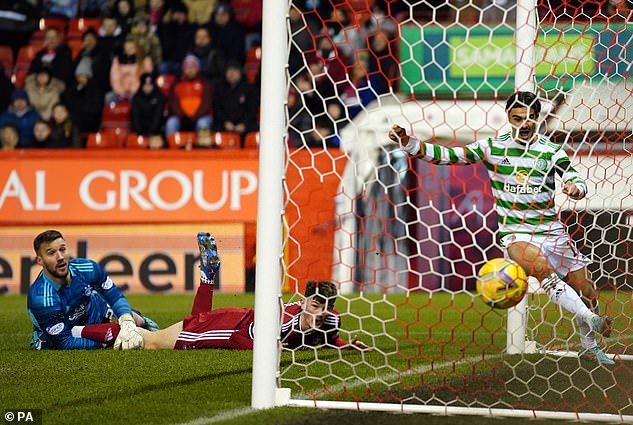 Roughly 20 yards from goal, the English midfielder smashed a low left foot shot at goal first time. The ball took a wicked deflection en route the boot of David Bates and spun low past Woods for 2-0.

The midfielder’s first goal since a £1.5million move from MK Dons won’t go down as a classic. In a nip and tuck title race Celtic can’t afford to concern themselves with how they reach the finishing line. Only that they do.

With a two goal lead Celtic could play free of stress or anxiety. They could – probably should – have had one more before half-time. 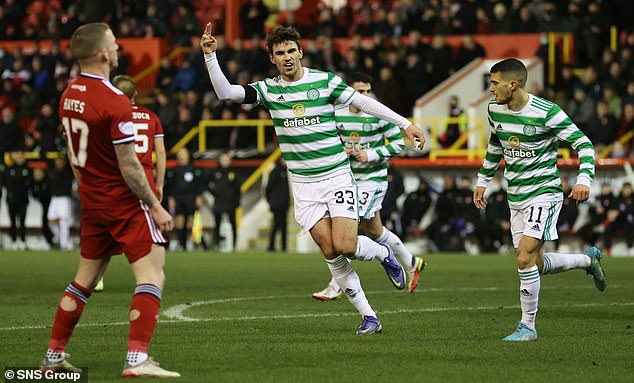 Reo Hatate sent Maeda scurrying into space on the left, a low cross turned out for the corner by Jonny Hayes just in time to prevent Liel Abada scoring his 15th goal of the season.

Jota did have the ball in the net once more before half-time and a decision to chalk the strike off was an error from referee Willie Collum. Plucking a high ball out of the air, the Portuguese was judged to have nudged a defender before tucking the the ball into the net. Had that one been allowed the second half might have felt a good deal less fraught.

As an attacking force Aberdeen had been non-existent. Heading for a fourth straight game without a win, Stephen Glass needed a reaction. Or even a shot on target. 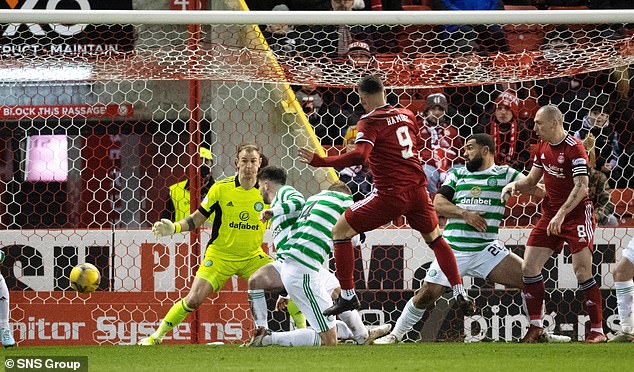 Ross McCrorie drilled a ball across goal which so nearly found Christian Ramirez and the tide began to turn. With their first real attempt on goal the Pittodrie side battled their way back into the game. A free-kick in a dangerous area produced a move straight off the training ground. A free-kick was pulled low across the face of goal and Ramirez applied the finish.

From being out of the game completely Aberdeen were a team reborn. Ramirez had the ball in the net again minutes later after a superb turn and swivel, the celebrations cut short by an offside flag.

Even so the team in red were now a completely different animal, red shirts swarming all over a Celtic side dragged into a battle they clearly didn’t expect. Within five minutes of the Ramirez goal Pittodrie erupted as Aberdeen drew level.

Once again Celtic’s problems stemmed from the concession of a free-kick in a dangerous area of the pitch. Funso Ojo flighted a dangerous ball in from the right and Lewis Ferguson – Aberdeen’s scorer in the 2-1 defeat in October – glanced the ball into the net. 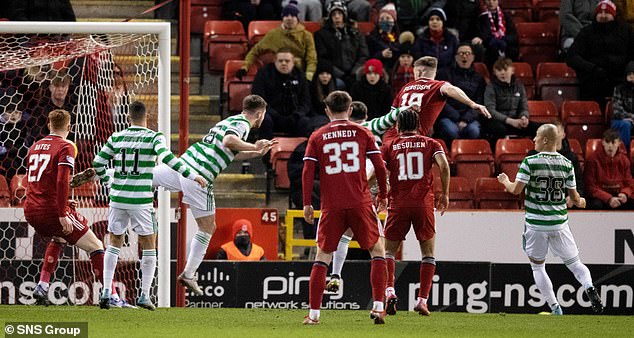 After a first half when they couldn’t strike a match Aberdeen had now forced the ball into Celtic’s net three times in 16 minutes. The turnaround was both astonishing – and short-lived.

Within a minute Celtic were back in front. When Jota smashed a bouncing shot into the net Aberdeen protested long and hard against the award, claiming Liel Abada was offside when Anthony Ralston looped a header into the winger’s path. It was a claim born of frustration rather than merit.

Kudos to Aberdeen. Despite the hammer blow of seeing their foothold in the game wiped out in the blink of an eye they kept at it.

Scorer of the equalising goal, Lewis Ferguson could have had a hat-trick. It took a quite superb Joe Hart save on the goalline to prevent the midfielder levelling once again with a ferocious back post header. Presented with a direct free kick 20 yards from goal Ferguson curled it inches over the crossbar.

If nothing else Celtic knew they’d been in a game. Travelling to Motherwell on Scottish Cup duty o Saturday Aberdeen could do with starting that game the way they finished this one.