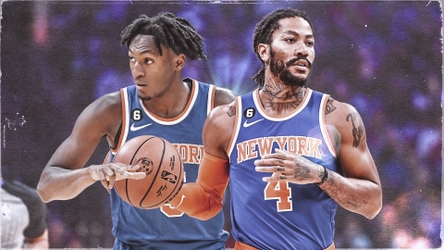 We’re about a quarter into the NBA season, which means trade talks are beginning to percolate across the league.

SNY’s Ian Begley reported a couple of Knicks guards — Derrick Rose and Immanuel Quickley — are involved in some discussions.

Both have been a key part of the Knicks rotation, with the latter improving yet again despite continued shooting struggles. Looking at their situations from another angle, they leave fewer minutes for the young wings, and have contracts expiring soon.

With the Knicks’ price reportedly centering around a first-round pick, here are five trade ideas should New York commit to moving one of the two.

If the Knicks just want to clear a rotation spot for a draft asset cleanly, this is one trade that could do it.

The Lakers are well under .500 and are one of the worst-shooting teams in modern history, something Rose could assist with. He’s shot above 40 percent the last two seasons and has been solid this year too. He’d immediately be a top Lakers option at point guard.

New York could bench Beverley, who brings a pedigree to any team’s locker room, opening the rotation and utilizing him only in emergencies, likely behind Miles McBride. They’d also get one of Los Angeles’ two available firsts, sure to be protected given their late arrival and value in the face of the Lakers current trajectory.

Quickley is on his rookie-scale contract, making a one-for-one trade difficult unless the Knicks are targeting another prospect due for an extension. However, they can kill two birds with one stone, attaching Evan Fournier’s larger contract to Quickley to shed future salary and improve the team.

This package nets them Barnes, a steady veteran that could boost their defense and three-point shooting, and the draft compensation they’re pursuing. It also allows the Knicks to get off Fournier’s deal, and avoiding a Quickley extension.

Another team that could be interested in tossing the Knicks a pick for Rose’s services is Memphis, in the thick of the Western Conference Playoffs race with their lead guard dealing with injury. Rose would make for terrific insurance against future missed time, and can be more of an impact-maker offensively than current backup Tyus Jones.

The Grizzlies have a couple of wings that would make this trade work. Green has yet to play and would bring some championship mettle to the bench, or the Knicks could lobby for Dillon Brooks to go along with the pick.

Detroit is scrambling at the backup guard spot, with Killian Hayes still struggling to find his NBA footing and Cory Joseph providing much of the same. To beef that position up with a talented young guy in Quickley would help round out their Cade Cunningham-Jaden Ivey backcourt rotation with some defense and shooting.

Once again the Knicks get their desired pick, or the removal or adjustment of protections on the current pick Detroit owes them, get off Fournier’s contract and get a reliable piece in return. Bogdanovic would bring some much-needed shooting to New York’s mix.

Washington could use more stability at the point guard spot, in exchange for a lesser prospect that could help the Knicks shooting woes, and either a future pick or removing the lottery protection on this year’s already heading to New York.

The Wizards are currently the East Conference’s fifth seed, but it’s early yet and some worthy adversaries aren’t far behind them.